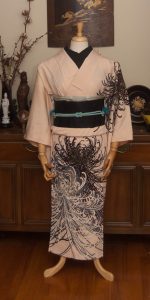 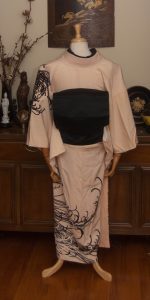 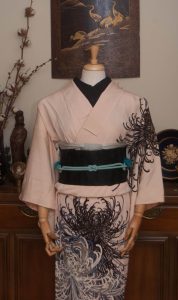 This may be the last weekend in August, but we’re still suffering the heat here. With the humidity factored in, they’re predicting temperatures in the high 30s again this week. So I decided to run with some cool summer white usumono coordination for this month’s monochrome outfit, even though I did a white/cream one not long ago with the wedding ensemble.

I often find myself breaking the rules a bit with these monochrome outfits. I guess I figure that if I’m playing with one rule, I may as well play with them all. So this outfit is sort of all over the place formality-wise and season-wise, but I really wanted to keep it all in that warm white/cream family with yellow accents to make the bells on the kimono pop out. 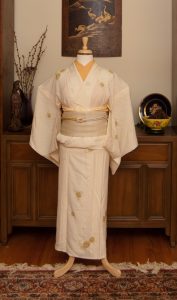 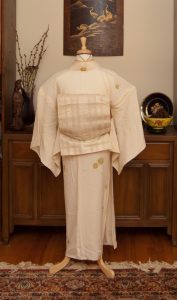 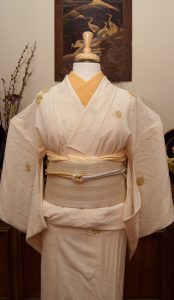 Also, if I’m being honest, I just don’t have much variety when it comes to actual summer-weight accessories, so I had to use normal ones. Maybe I should limit myself to only buying usumono for a while. I’ve already cut down on my buying habits lately, this would be even better motivation to stick to that.

I quite like how this turned out, even if it does have a lot “wrong” with it. And it wasn’t too terribly overwhelming to put together even in this oppressive weather. Win-win!

Don’t forget, there’s only a few days left to enter the stencil giveaway! 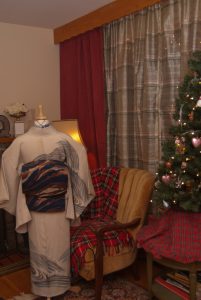 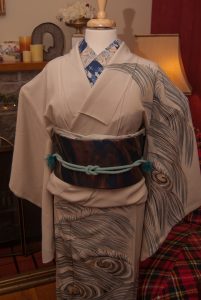 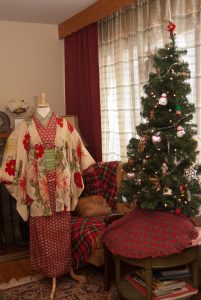 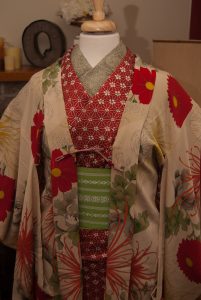 This is one of those lessons that reminds me that auction photos can be very inaccurate. Don’t get me wrong, it’s a lovely obi, a nice crisp hakata in a forest green on cream, but in the auction photos it looked very pink. I fell in love with the idea of green on pink. Thankfully I only paid a penny plus shipping for it, and I am sure I will find a good use for it, but it was a reminder not to get too excited or attached to things until they’re actually in your hands.