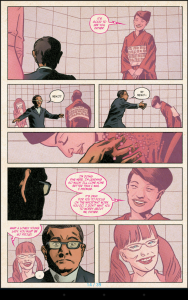 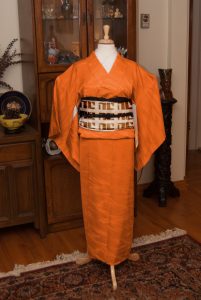 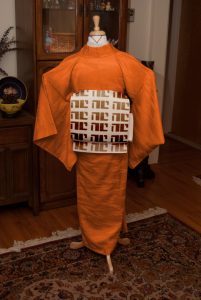 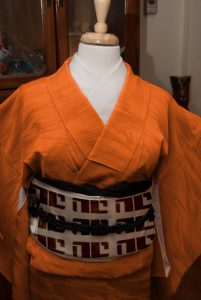 Last week, I promised the next instalment of this feature would be creepier, and I’m fairly certain I’ve succeeded! It started with this bizarre haori Naomi sent me a while back. I’m assuming it’s supposed to be clouds or some sort of abstracted design but we both thought it looked like blood spatter. It seemed like the perfect place to start a Halloween outfit. I decided to run with the blood splatter and aim for a crime scene feeling. The kimono is another that Bonita sent to me, along with the gorgeous wedding kimono from a few weeks back. It is mofuku, and is in incredibly fragile condition. It’s tiny and several of the seams are coming apart, and between the fact that it’s funerary wear and the shape and size of it, I know it will never get worn. It seemed thematically apt for the outfit though, so I layered it over a red under-skirt. I found this crime scene tape ribbon and thought it would be interesting to use as an obi-jime. However, I misread the listing and ordered waaaaaay more than I actually needed, but I think it worked out in my favour. I love how it looks wrapped around so many times. The red shigoki obi evokes more blood, literally and figuratively tying it all together. I’d hate to run into the person wearing this outfit at the end of a dark alley! 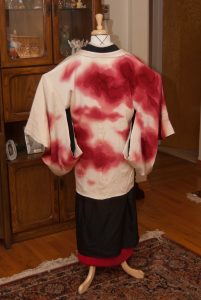 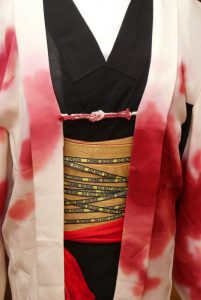 We’ve got two coordinations to go, and they will both be more costumey than creepy. I hope you’ll check back to see! And yes, before anyone asks, the title of this entry is indeed a reference to BBC’s Sherlock.

For today’s instalment, since we’re still a few weeks out from Halloween, I wanted to try for another thematic but still ultimately wearable outfit. Every so often I think back to this spider obi and wonder why I don’t use it more often. Then I pull it out and I remember what a complete and utter monster it is to work with. The textile itself is amazing. Soft enough to tie easily, but the rough texture that lets it keep its shape and stay put really well. However, the pattern placement is just so awkward. It’s quite rough to get one of the embroidered spiders on the front while still making sure the focus is on the otaiko area. Thankfully with a bit of fiddling and flailing and assistance from my poor, long-suffering father, I was able to get it to work! The spider haneri had to make an appearance too, of course, and this olive green komon with pink arabesques seemed like the perfect nearly-neutral foil to make sure the spiders were still the star of the show. I think they look really nice together. However, even though this kimono is actually one of the ones I own that still fit me, I can’t see myself wearing this coordination any time soon, because the obi is so frustrating. 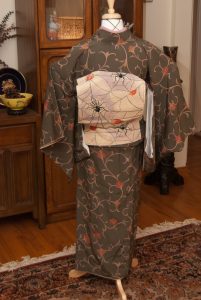 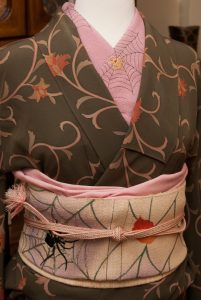 Next week, things start to get less traditional and more costumey!

It’s October, and that means it’s time for a new month-long feature here on Kimono Tsuki – Spookitsuke! (If you’ll pardon my silly portmanteau of spooky kitsuke). By now, we all know that kimono in and of themselves do not a costume make. However, that doesn’t mean that there’s no room for overlap! Every Sunday this month, I will be putting a thematically appropriate outfit on the mannequin. From creepy motifs to an outfit lifted straight out of one of my favourite comic books, every one of these coordinations would fit right in at the scariest costume party! If you’re thinking of wearing kimono to a Halloween event, whether it be just a thematic outfit or detailed costume, I hope you find a bit of inspiration in the coming weeks. 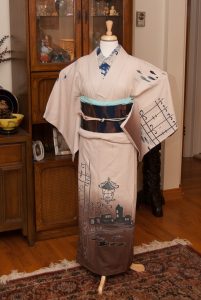 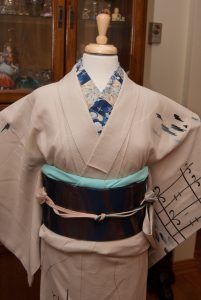 This first week’s is a straightforward outfit using my tried-and-true gothic landscape houmongi. This piece is one of my favourites, due to the unique motif. It’s a great modern piece and a pleasure to work with, since the silk is heavy and textured and the collar is already sewn in half. I paired it with this shiny tsuke-obi I bought on a whim a few months back, and I’m so happy with how well they work together! I used pale blue accessories to draw attention to the foggy mist on the kimono. Overall, it’s a perfectly “normal” outfit, until you look at the hem of the kimono. Victorian-style lanterns, wrought iron railings, and even a hill with tiny cross grave markers all evoke a creepy, crawly, wonderfully Halloween feeling.