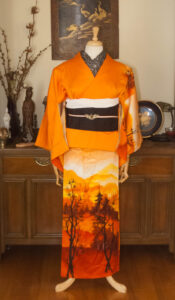 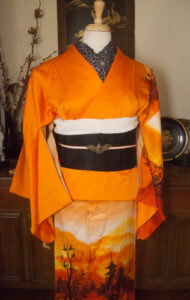 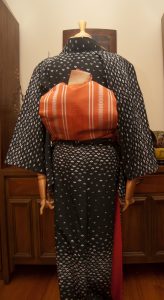 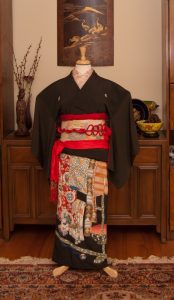 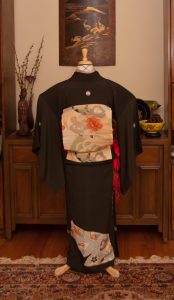 Nearly every culture has some form of vampire mythos, and Japan is no different. Iso-Onna, the Coast Woman, is described as a beautiful woman who hunts along the shores of Western Japan. She lures fishermen, sailors, and travellers to her and then drags them into the water and uses her hair to suck their blood. Somehow that seems even more horrible than using teeth! 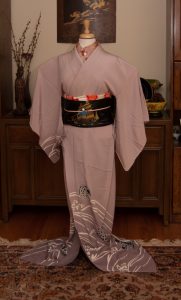 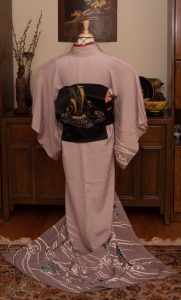 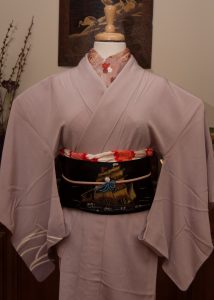 For this coordination, I knew I needed to evoke the coastline, Of course, I had to use my hikizuri with the crashing waves on it, paired with this gorgeous pente ship obi. I brought in some pops of red to represent blood, and couldn’t resist finally featuring the awesome rhinestone octopus a friend sent me.

I love the drama that the trailing hem brings to this particular outfit. It reminds me of seawater spilling across the shoreline which is absolutely perfect for the theme. It also still feels wearable, despite using relatively theatrical pieces. I’ve worked hard making sure all of these coordinations don’t feel overly “costumey” and I’m glad I’ve been able to stick it out.

Only one more to go! Come back on October 31st to see the final yokai! 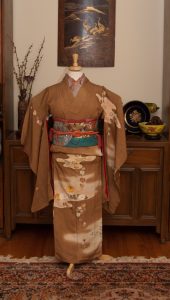 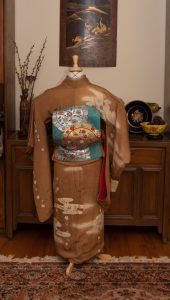