It’s the last weekend of the month, and you know what that means! It’s #monokimono weekend, and for this one I decided to go blue to suit the rainy mood outside. I also knew I had to go with something easy, so a poly komon and hanhaba obi fit the bill. If you’re not a fan of Kimono Tsuki on Facebook you won’t have seen my post, but Friday afternoon I lost an argument with the staircase at work and came out of it a little worse for wear. I’ve got a mild concussion, a sprained knee, and two cuts across my forehead that required surgical glue and a tetanus shot. That’s not counting all the varied aches, pains, and bruises scattered all over the rest of my body. Because of this, I knew I had no energy to wrestle with a bigger obi or a more fussy or fragile kimono. I didn’t want to skip this month completely, so I found the solution with these easy, modern blue pieces. 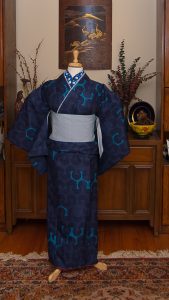 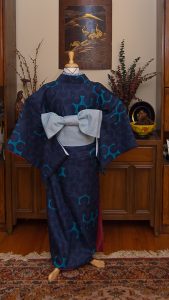 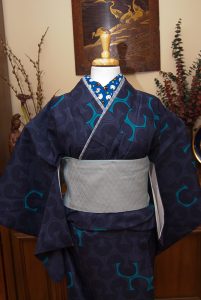 Initially, the outfit looked a bit too dark and heavy, and the obi wasn’t really jiving. Thankfully, using my blue cotton striped haneri in place of a kasane-eri helped lighten things up around the top. The kimono is also very big; I’d forgotten how big, so getting it onto the mannequin was a bit more fuss than I’d hoped for. But I think I made it work. This certainly isn’t the tidiest or best kitsuke I’ve done recently, but I’m proud of myself for managing to get something out despite my battered state!

I’ve also just noticed this outfit bears more than a passing resemblance to my little kimmidoll mascot over there on the sidebar. That was entirely accidental but it pleases me greatly. 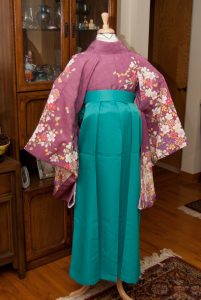 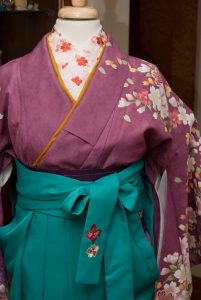 What have we here?*

I found this obi online several months ago, and kept coming back to look at it. The whales are just so adorably goofy and charming, and I fell completely in love. Eventually I found myself with a bit of cash to spare on something special for myself, and after being enabled by pretty much every single one of my online friends, I went for it. I bought it from Murata, a store based in Vancouver, BC, here in Canada. It only took a few days to get here, and believe me, after over a decade of ordering almost exclusively from Japan that speed made me giddy. Kazue and Fumie were also both an absolutely pleasure to deal with, and I look forward to ordering from them again in the future. 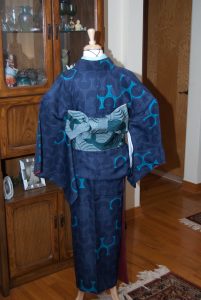 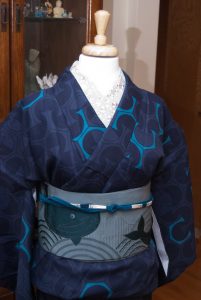 I felt that this obi is so fun and special that it had to be the focus of the outfit, so I went the vaguely monochrome route again. I thought this modern poly komon had a bit of a watery feel to it, and I love how it matches the obi but still manages to fade into the background, making sure all eyes are on the whales! This obi is also incredibly long, to the point where I had to wrap it around the mannequin three times, rather than the usual two. This means I’ll be able to wear it myself, and be able to tie all sorts of fun musubi with it. I can’t wait!

*(I would apologise for that terrible title, but I am not remotely sorry!)