One of the great things about iromuji is how they can allow you to really focus attention on something other than the kimono itself. They make a great neutral canvas for a really bright or busy obi. I decided for this week’s entry that I’d do a really high-contrast coordination with a lot of “punch” to it, and this obi was the perfect place to start. It’s a very special obi; I received it anonymously from some lovely person online. I suspect their intent was to have me coordinate it with my Shah Mosque houmongi, but in the end the styles and colours were too different and I could never get them to work together. This kimono, however, is ideal. It’s a similar background colour to the houmongi and the orange-red of the obi really pops against it, but it doesn’t compete with the pattern on the obi itself. It’s a wonderfully neutral foil for the gorgeous obi, and the colours couldn’t work better together if they’d been made to go together. I’d initially thought of using a third bright colour (yellow or pink) for the obiage and obijime but then I remembered these pieces, and everything just clicked. 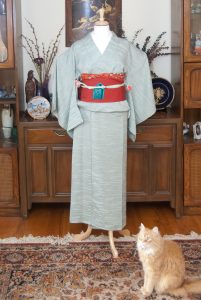 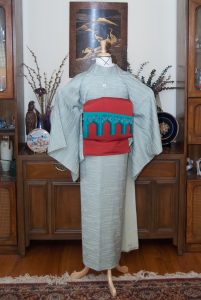 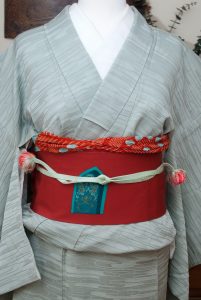 We’ve also got a special guest photobomber today! Those of you who are longtime readers have probably seen Vinnie before. He usually avoids the mannequin but today he decided he wanted to be the star of the show.

I hope you’re enjoying seeing these posts as much as I’m enjoying doing them! We’ve got one left, and then it’s time to focus on newer things.

For this week’s outfit featuring my mint iromuji, I wanted a big departure from the very standard coordination from last week. This adorable kitty haneri is a very deep rich teal, and it struck me that I had a bunch of similar items in various shades of the same colour. I think pairing the iromuji up with them and using cooler lighting than last week’s photo really drives home the point that I was trying to make, that one kimono can look incredibly different with different accessories, and in different situations. Surrounded by the cool tones of the haneri, obi, and hakama the kimono itself leans much more towards the blue side of things than it did against the gold and lavender of last week. 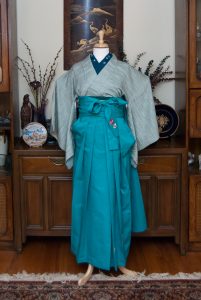 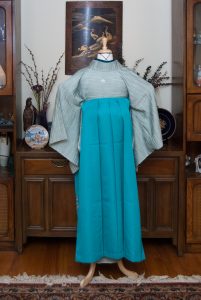 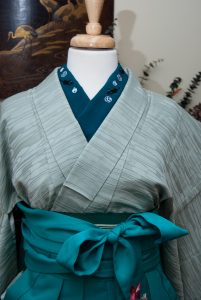 So far, I think this experiment is going swimmingly! I look forward to seeing what else I can do with this piece.

Right before Christmas, my sweet mother tried to help save my sanity at work by finding scans of a few volumes of Kimono-Hime and sending them to me to read. Clearly, this was a horrible mistake. When I got the adorable lobster tsuke-obi mentioned in the previous entry, I decided I’d do a really non-standard coordination inspired by the Kimono-Hime magazines. I decided to have some fun with layering, and rather than use a juban, I used my yabane komon and arranged it to be visible at the hem and sleeves as well as the collar. I hiked my hems up and used some of my favourite pumps and silver-and-black striped knee socks. While I certainly wouldn’t wear this outfit in any “normal” context, I’m actually really happy with how it came together. It feels more like a dress than kimono, and I sort of love that!

My mom also got me this gorgeous hand-blown glass lobster, and I couldn’t resist posing with it. Of course, Vinnie had to get in on the action too.

I went a little overboard with the photos for this one, and rather than make this too image-heavy, if you want to see the rest please check my Flickr :)i

Iromuji are probably the most versatile kimono you can own. They are solid-coloured kimono, either uncrested or single-crested. They can be worn relatively casually with a simple nagoya obi, or dressed up with a formal fukuro obi. They’re appropriate for everything from religious observances to tea ceremonies to weddings (if they’re crested), and their solid colour serves as a great backdrop for showing of really spectacular obi.

They’re a great investment, both for someone with a large collection looking to expand and for someone just starting out.

I have three, but I would definitely like to invest in more in the future.

The auction photos when I purchased this gave it a much more ice blue cast, but I can’t say I’m disappointed in the lovely minty green shade of this particular kimono. The textured rinzu weave is so lush that it almost looks like different colours. I’ve paired this up with several obi that are difficult to work with, and it always manages to work out great.

This is an amazingly flattering soft pink. I’ve only worn it out once, but I felt really girly in it, without it being overbearing. It also makes a great foil for several of my obi I had lying around that didn’t match anything I had before.

I love the weave on this one, it’s covered in tiny little houses, bridges, and trees. The silk also has this amazing, nearly-iridescent quality to it. In some lights it leans yellow-green, in other lights it’s got a subtle blue cast. I tried to capture both in the photographs, but did not quite succeed. Unfortunately, this piece is small for me. Not so small that I can’t wear it, but it can get a bit messy after wearing it for a while. Luckily, it fits my friend Amelie really well, and looks great on her!