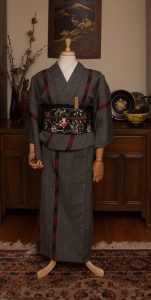 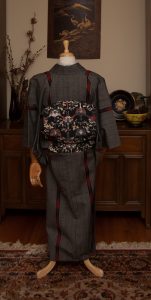 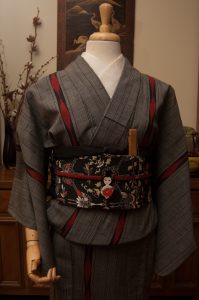 I can’t look at this obi and not think about Bubba from Forrest Gump.

Anyway, like I was sayin’, shrimp is the fruit of the sea. You can barbecue it, boil it, broil it, bake it, saute it. There’s uh, shrimp-kabobs, shrimp creole, shrimp gumbo. Pan fried, deep fried, stir-fried…

You probably know I love goofy crustacean motifs, and when I saw this obi listed online (and on sale!) I jumped on it. I’ve actually had it for over a month now. 😳 Every time I find myself time to coordinate an outfit, something else grabs my attention. But yesterday I was determined to let this adorable obi shine. I waffled for quite a while looking for the perfect kimono and then it hit me; this tsukesage with a woven net-like design was it! Nets for catching shrimp, and the purple colour is just the right desaturated shade to go nicely with the burgundy of the obi itself. 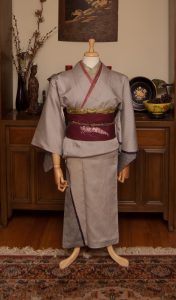 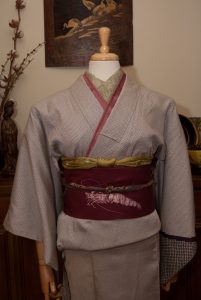 Green accessories add a pinch of contrast, but since I used a similarly desaturated olive colour they’re still harmonious and balanced. This outfit is technically too casual for a date-eri to work, but I wanted just a pinch more of the warm/burgundy tones without adding more colour or pattern. I really wanted the shrimp on the obi to be the star here, with everything else almost fading away into the background. Do you think I succeeded? I do!

Also I’m sorry if these pictures seem dim or off slightly; my flash unit died yesterday and the replacement just arrived and I’m still getting the hang of it.

What’s this? I’ve worn kimono twice in less than a month?! Apparently unemployment agrees with me…

I’ll be honest, I got dressed for part of a bigger group project that I’ll hopefully be able to share with you all soon. But I figured while I was all done up I should take advantage of it. Also, you get to see part of my bedroom for once, instead of the living room. It’s a fair bit more boring, but I wanted a more neutral background. So not only do you get to see my goofy face, you get to see a small part of my ridiculous pile of collectables. I’m sure you’re thrilled. 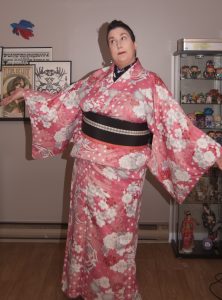 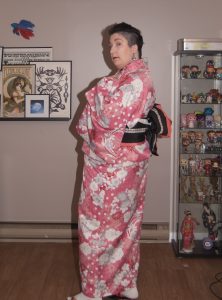 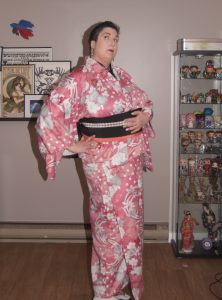 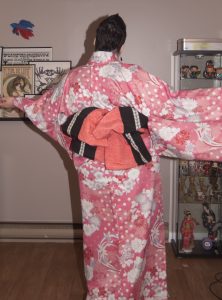 I really do love these giant kimono from Kimonomachi. Unfortunately, Rakuten Global has shut down so ordering from Canada is way more of a hassle now than it used to be. I decided to pair the pink one with this awesome red and black faux-shibori obi in a sort of cute improvised casual musubi. Black haneri and black zori (which got mostly cropped from the photos, alas) help anchor the outfit and echo the black of the obi. I kept my makeup soft and pink to suit the kimono, since my hair is already edgy enough at the moment. My moonblossom kamon kanzashi earrings were the perfect finishing touch, I think.

I somehow didn’t realise how many tachibana items I have in my collection until just now! It makes sense though, it’s a motif I love. I have lots of kimono I could have used for today’s coordination, but I thought I’d give this obi some love instead. It’s not in the best shape, but it’s so soft and sweet that I’m able to look past the smudges. 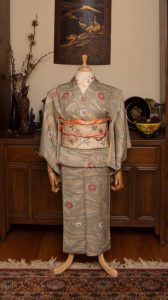 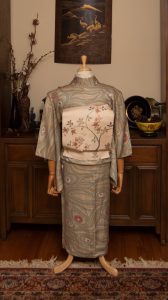 It’s a fukuro obi, so arguably too formal for this komon, but because it’s got an evenly-spread all-over woven pattern with no metallic and no embroidery it reads as very casual to me. On first glance, I think most people would assume it was a nagoya obi.

I decided to keep things very soft and genteel with this muted kimono. The peach accessories were already out from a previous coord (and my utter inability to put things away when I’m done using them), but I realised that not only does the peach look lovely, but the obiage actually has a motif of tachibana as well!

I’m not sure this outfit really features and focuses on tachibana but I do like how it turned out nonetheless.

Ever since I saw this tutorial for an adorable patapata musubi with a bow accent, I knew I wanted to try it. I kept procrastinating for some reason, but now I’m glad I did because that means today I can show you this perfectly puffy pink patapata coordination! Japanese is a language full of adorable onomatopoeia, and patapata represents the fluttering sound made by bird or butterfly wings, and looking at the soft blousy folds it’s easy to see where the name came from. 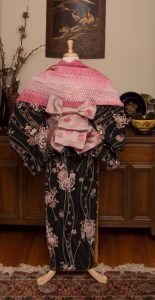 I used the pink bubble side of my adorable whale obi, along with a sweet multi-floral black komon kimono. The outfit felt a little too boring as-is, so I pulled out a bright pink haneri and lace shawl to complete the look while making sure nothing distracted from the adorable obi bow.

If you’d like to learn to tie patapata musubi yourself, here is the video I followed! I love Sunao’s videos, they’re very clear and the English subtitles are very well-written.