Since yesterday’s outfit turned out entirely not Christmassy, I thought I’d remedy that with today’s aggressively festive coordination. Red, green, and yellow/gold abound! For some reason, I thought the grey areas on the kimono were a lot lighter, but I think it still works out well and provides nice contrast for the obi.

I’m actually incredibly fond of how the yellow accessories pop against the darker kimono, and I think I’d very much like to see this outfit with a different obi. I guess I’ll just have to try it out later. Aside from that, there’s really not much to say about this outfit. It’s festive, it’s cute, it’s not terribly exciting. 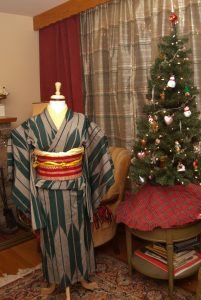 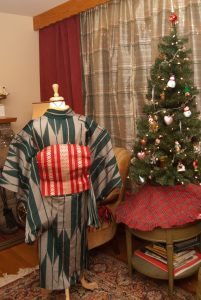 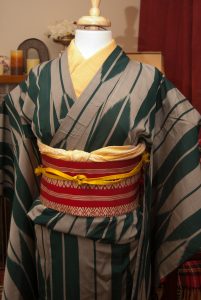 Tomorrow’s the last day! The end is in sight! And honestly, it can’t come too soon. As fun as this project has been, I’m very much ready to have a few days off in a row and share some other things with you all.

I honestly don’t have a ton to say about this outfit. I kept the accessories very simple and tied a very fluffy bow-style knot for the obi. My cute little maneki neko netsuke added a final little accent of red and a bell for that perfect finishing touch. Jingle all the way! 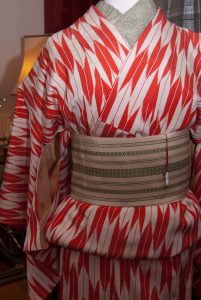 There’s really not much more to say about today’s coordination. I think the simplicity of this outfit is what makes it so effective. Tomorrow’s will be more fun and vibrant though, so be sure to check back! 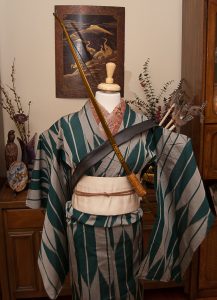 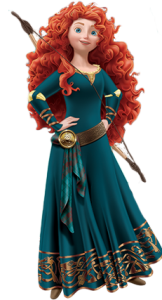 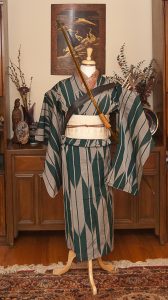 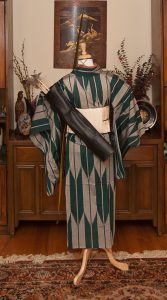 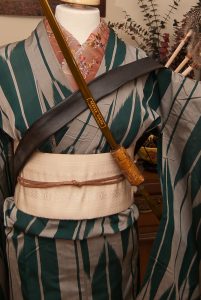 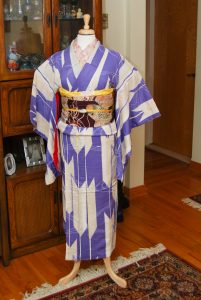 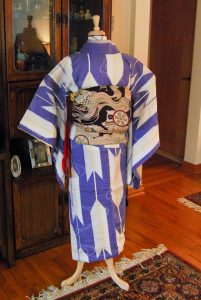 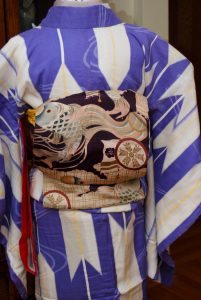 Koi-shaped streamer kites, known as koinobori, are tradtional decorations for this holiday. There are typically two large koi depicting the parents, and then one smaller one for each child in the family. I found this obi with koinobori on it on eBay eons ago, and it remains one of my all-time favourite pieces. It’s a strange duck, softer silk than obi typically are, and full of awkward seams on the back side. I suspect it started life as either a kimono or some sort of decorative piece, but someone decided it would make a lovely obi and I’m so glad they did!

Arrows are also a fairly typical motif for the holiday, so I paired the obi up with this bold Taisho-era yabane komon, and I’ve always thought this adorable car obidome Kansai_gal got for me looks like a little toy car, so it felt like the perfect finishing touch for the outfit.

So as some of you may know, I work in just about the coolest toy store in the universe and twice a year we organze a toy convention. I usually use it as an excuse to wear kimono, and this year was no exception. I’ve been wanting to wear all these pieces for a long time now, and I’m so glad everything came together so well. The kimono is way too small so I could not swing an ohashori, but it’s a casual enough outfit that I think it’s sort of irrelevant.

I decided to pair up the purple yabane I bought last year in Boulder with the meisen haori I bought this year. I paired them up with black and yellow accessories; a black obi with yellow, purple, and orange karabana, the same yellow shibori obiage and hakata obijime I wear with pretty much everything lately, a pretty black haneri from Naomi, crazy black weiner dog tabi from Kansai_Gal, and my new moon-shaped obidome. I feel like this is a very cohesive outfit, every colour is echoed on at least one other item, so it all ties together well.

And a close-up of the best tabi ever:

If anyone needs further evidence that my job is indeed incredibly awesome, one of the cosplayers at the con allowed me to wear his handmade Ghostbusters Proton Pack and take a few photos. It was surprisingly comfy, even with the obi!

In the dealer’s room, I found an awesome little bit of nostalgia – the original Crystal Swift Wind, She-Ra’s mangical flying unicorn/pegasus. I had one of these when I was a little girl, but the plastic was thin and brittle, and someone (most likely me) stepped on her at some point and she shattered. Unfortunately, she was way out of my budget for the day, especially for a used toy, so I had to say my goodbyes. But not before getting a picture of me pouting with her.

Thanks for looking! If you’d like to see pictures of the convention itself, there is an album on my Facebook that is viewable by following that link.