I realized recently that I had no hanhaba obi that were not hakata weave. I told myself I should probably remedy that and then promptly got distracted by bigger and shinier things. Such is life. Thankfully, I stumbled across the listing for this little beauty on eBay with less than a few hours to go, tossed out a bid, and won it for a song. The pictures portrayed it as sort of a flat purple with yellow which seemed cute but not particularly exceptional. Imagine my pleased surprise when I opened the mail to discover a rich, shimmering aubergine with bronze accents and a bronzey-gold back side. I am not sure what I’m going to wear it with yet, but it’s beautiful, multi-seasonal, and dressy enough to wear with more slightly formal kimono. I’m so pleased!

Once you’ve figured out what kind of kimono is appropriate for your event or lifestyle, you’ll need to pair it with an obi. Deciding which kind of obi to wear can be even more overwhelming than picking the kimono. Hopefully this will help guide you in the right general direction!

*Thanks to Ichiroya for the permitted use of their images. Originally these items were all available for purchase and the images linked back to the sale listings, but they have been sold!

Thank you to Rick and the team at Websytz for getting my technical issues sorted out!

I recently got back from a wonderful week in Boulder, Colorado. It was really nice spending time with my friends, catching up with people, and just enjoying what I’ve truly come to believe is my second home.

Of course, I had to make a visit to Janine at the Vintage Kimono Showroom. I had no plans to buy anything, but she had one incredibly amazing haori and an obi that I’d admired the last time I was there, and somehow they magically ended up coming home with me. I also had the fortune of ordering Wearing Propaganda – Textiles on the Home Front and having it shipped to my best friend to save money, so that came home with me too. I’ll be doing a review soon. But I digress; onto the amazing stuff I bought.

I actually first found this obi the last time I was there but somehow talked myself out of it. When I saw that it was still waiting for me, I had to cave in. I love hakata of all kinds, but especially the sort that’s not geometric, because it’s so much less common.

I finally have meisen that fits me! So yes, admittedly it’s a haori and not a kimono, but I don’t care. It’s vibrant, it’s tacky, it’s amazing, and I love it. I have no idea what I’m going to pair this one up with, but I really don’t care. I couldn’t let it escape my grubby little clutches.

I’d originally found a subtle purple and cream striped haori while at the showroom but when Janine brought this beauty out I just couldn’t say no. It’s not something I will ever find again, and I could not pass up the opportunity. The lining is also adorable, tiny little kokeshi dolls.

I also came home to a box of goodies from Naomi, so I’ll be sharing the contents of that soon enough.

Every once in a while, someone does something amazingly kind that you absolutely don’t deserve, and it reminds you that there are still some truly kind and exceptional people out there. Suara, one of the members of the Immortal Geisha forums, is one of those people.

As I’ve mentioned before, I love anything with the Tokaido 53 Stations motif, and there was a gorgeous obi on eBay that I had my heart set on. Several friends and family members all offered up some cash to help me get it, and I put in a ridiculously high maximum bid. Things went perfectly until the very last second, when I was sniped. I was devastated. I posted a rather angry and expletive-laced rant on the forums, and did my best to move on.

A few days later, another beautiful obi with the same motif but different stations got posted, and I was determined to get it. Unfortunately, I’d suffered the violent death of my backup hard-drive and had to re-prioritize my finances. I bid what I could, got outbid, and yet again posted on the forums, expressing my frustrations.

Fast-forward a few weeks, after a rather long and stressful few days, when I come home to this in my inbox:

The last obi for over $170,– made you so sad and I know how much you like this series of Obis. That is why I bid and fought for this obi as a small present to you. A present to say thank you for your kind help, not only to me but also as a mod for many many people here at IG. I tryed to let this obi send to you directly, but I did not have your name and address, nor you Ebay name, and I think, the seller did not realy know what I wanted. So instead of taking any risk, that a wrong person gets it, it is on its way to me, and if you would be so kind to send me your name and address, I will send it right to you ok?

I think that you are a wonderful person, so please except this small gift to show my apreciation.

I was at a total loss for words – in fact, I started crying. While the entire forum is a close-knit community, I’d never dealt directly and personally with Suara, never had any interactions that I’d have imagined would have made such an impression. I was, and still am, beyond touched.

I made a promise to wear the obi and photograph it as soon as possible – unfortunately when it arrived this morning it was too hot for boxers and a tank top, let alone a kimono suitable for this amazing piece. However, I did think that the situation deserved at least catalogue photos, because it’s too beautiful not to share.

The obi base is a soft neutral with a slight shimmer – not quite gold, and not quite cream. The three stations on it are Ishiyakushi, Ohtsu, and Odawara. They’re woven in with great detail in a mix of warm browns and beiges and cool blue and green. The obi is lush and gorgeous, and will make an amazing complement to my strange chidori houmongi/kurotomesode hybrid, as well as several other kimono. 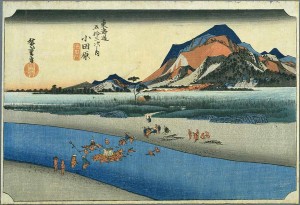 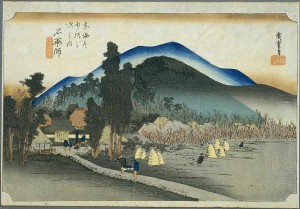 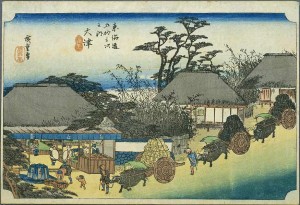 *A quick note on my station numbering – some people may have noticed that it doesn’t always correspond with the numbering used on all websites. The problem is that some places start the road with Nihonbashi being 0 while some consider it station 1. I stick with the numbering system the first reference I used, which starts at 0.

Sometimes, I suspect the mail carriers in this area really dislike me. I’m constantly getting big packages. Today, I really surpassed myself with three separate deliveries! One, a book called When Art Became Fashion: Kosode in Edo-Period Japan, arrived in the regular post and I will be writing a review of it when I have time to read it properly. First impressions are very positive though.

The other packages were larger, and more unwieldy, and the mail carrier was kind enough to leave them with my neighbours since I was at the cardiologist. Getting home was like having an unexpected birthday, or Christmas come early! So much pretty stuff! Since there are so many things included here, I have used smaller-than-usual photographs. Please click on them to view big versions, they will open in a new window.

One of the few things I actually truly needed was another pair of casual, comfortable zori. Nearly all the footwear I owned prior to this was very dressy, all in shiny metallic vinyl or silk brocade. These fit nicely and I absolutely love the colour combo and the little chirimen silk insert in the stacked heel. They were a total bargain at $10!

This purse, and the one below it, were being sold by one of the sellers I regularly buy kimono from. They’re modern, and made of heavy denim-like cotton, but the designs are definitely kimono-inspired. This one in particular I can definitely see using every day. I love the contrast of the soft, girly fabric and the hard leatherette and metal details.

This purse was bought at the same time as the previous one. It’s much bigger than I anticipated (I suspect the measurements listed were off), but definitely no complaints there! It’s fun and bright and while I don’t anticipate using it every day, it will definitely be a way to add a splash of colour and personality to a quiet outfit, either kimono or western clothing.

Now comes the find of the month, a bundle of five vintage obi for a total of twelve dollars (plus S&H). They were listed as “scrap fabric,” but as you’ll see four of them are completely wearable as-is, and the fifth one I am going to attempt to salvage and turn into a two-part easy obi.

This is the main reason I bid on the bundle in the first place. I am just head over heels in love with this obi. The colours and style of yuzen make me suspect it’s late Taisho or early Showa, and even if it’s not it still evokes the feel nicely. I plan to wear it with my indigo Taisho houmongi sometime soon.

I openly admit I am not very fond of the base colour of this obi, it’s a sort of a strange gold/mustard, but the woven flowers are very pretty and versatile, so I’m sure I will find a good use for it.

I’ve wanted something with a smooth wave motif for a while now, and this more than satisfies my urge. It’s vibrant and graphic and I like it very much.

The auction photos really didn’t do this one justice. It looked like a cute but relatively boring obi with some gold weaving and round dots. In person, both the gold and the red have such a rich silky shimmer to them that they look like rubies set in gold filigree.

This was dubbed the Narwhal Bird Obi by my friend Kansai_Gal and I can totally see why XD. Unfortunately, it’s also the obi that is severely damaged – the silk is shredded to ribbons right above the folded area where the main heron is. Hopefully, I will be able to carefully cut it and sew it into a two-part obi. I will record my attempts and write an entry about that sometime in the near future. If worse comes to worst, I will simply turn it into haneri and possibly an obiage. The fabric will get used, one way or another.