Yesterday, January 25th, was Robbie Burns Day, a celebration of the life and work of Scottish poet Robert Burns. Traditionally, a Burns Supper is held, an evening filled with bagpipes, haggis, poetry, whisky, and laughter. A few weeks back, a family friend came over while this outfit was on the mannequin, and he jokingly asked if it was for Robbie Burns. It got me to thinking, how could I combine the two, and this “kiltmono” is what I came up with! I’d intended to do it yesterday but this flu season has been kicking my butt over and over again, and I could barely get out of bed. Thankfully today was better. 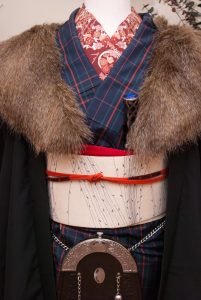 I hiked the kimono up quite high, to what would be roughly the length of a kilt. The white obi is to echo a crisp white dress shirt, and the black haori calls back to the formal black jacket typically worn with a dress kilt outfit. I chose the red accessories to tie together the red accents in the haori and in the tartan of the kimono. The sporran is my father’s, as is the sgian-dubh (dagger). Traditionally, the sgian-dubh is worn tucked into the sock with a formal kilt outfit, but it reminded me of the traditional kaiken dagger worn by Japanese brides, so I tucked it into the obi. The shoulder fur is reminiscent of both traditional fox fur kimono shawls and a pelt that would have been worn for warmth in the Scottish highlands.

Honestly, I’m kind of shocked at how well this whole experiment came together. As much as I love traditional kitsuke and “proper” kimono coordinations, I also really love demonstrating how modern and versatile these garments can really be. When we stop viewing kimono as rigid, regimented garments with strict prescriptive rules, and start remembering that they are first and foremost clothing and were once worn every single day, we’ll all be able to have a lot more fun with them while still remaining respectful.

Pieces in this coordination

Okay, maybe not such a grand finale after all, but a finale nonetheless! Today’s outfit serves two purposes – the last day of this project as well as Fudangi First Friday.

This kimono, despite being quite casual, has always looked somewhat festive to me. Something about tartans and plaids just feel like Christmas. It’s a common pattern on wrapping paper, and (as you can see in my photos) tree skirts and decorations. So using this kimono in an outfit was a given, clearly.

Pairing it up with red to make it punchier might be a fairly straightforward and expected coordination but it just works so well! I love how the faint stripes in the obi echo the other colours of green and navy. Initially I had no plans to take a picture of the back of the mannequin without the red haori, but I realised as I was tying the obi that the karuta musubi looks like a present, so I had to capture that too. 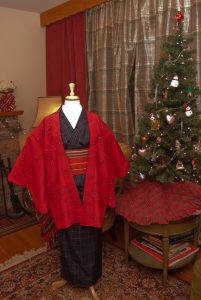 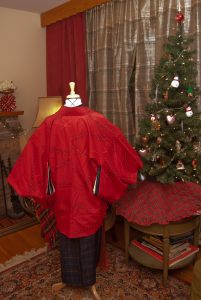 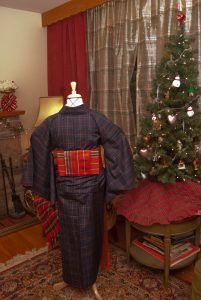 Okay, so this is certainly not the most dramatic or exciting coordination of the project, it’s comfortable and cute and worked out quite well. It was also easy to put on after a frustratingly long day that started with me slipping on ice and smashing my elbow and ended up with me nearly being trapped at work because the lock on the front door froze. I honestly didn’t have the energy for anything more complicated.

While this has been a mostly enjoyable project, if I’ve learnt one thing from it, it’s to never commit to twelve consecutive days of anything, no matter how much you enjoy it. Between holiday stress, work, family stuff, etc, I am burnt the heck out right now . I think I will be taking a little hiatus from blogging for a bit, maybe a week or ten days. I’ve got lots of stuff in the works though, so I promise I’ll be back in full force very soon! <3

Several years ago, I came across a photo of a very handsome man in an excellent combination of western-style modern clothing and kimono. He was wearing a crisp white button-down and a tie in lieu of traditional undergarments. Recently, I was reminded of this photo and set out to track it down. Some savvy friends of mine recognised what I was talking about and pointed me in the direction of Kidera-san, the owner and stylist of men’s kimono shop Fujikiya. Lo and behold, there he was in all his dapper glory. 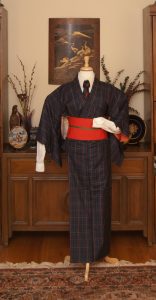 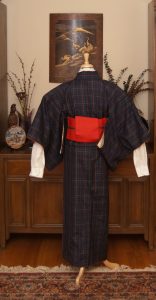 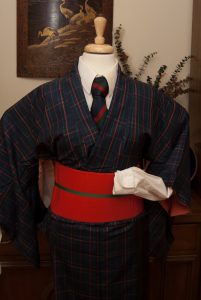 I was spurred on to do my own interpretation of this style, using women’s pieces but still keeping a decidedly masculine vibe. I’ve always loved this tartan kimono and thought it would be an excellent place to start. The colours in it have always reminded me of the tartan of the Black Watch Royal Highland Regiment of Canada, so I asked my father if I could borrow his regimental tie. The plain side of my red grosgrain hanhaba obi and a thin green ribbon pulled it all together. Initially I’d planned to fold the obi in half and use it more like a men’s narrow kaku obi, but it’s quite thick and doubling it up made it impossible to tie. Instead, I went with a flat, fairly neutral karuta musubi.

I think the whole outfit ended up being really effective, and if I ever get back to the point where I can comfortably wear kimono I’m definitely going to do something like this at some point.

Oh I’m a lumberjack, and I’m okay!
I sleep all night and I work all day!

I’d been waiting for the right opportunity to wear my lumberjack kimono, and I was starting to worry winter would come and go before I had the ideal combination of weather and free time. I guess the universe took pity on me, because we had a rather spectacular blizzard overnight!

I decided to pair it up with my ume and momiji tsuke-obi, since it seemed seasonal, thematically appropriate, and practical. I dressed in a sort of comfortable casual style, forgoing a proper juban for a turtleneck and a pair of tights. I figured the ridiculous hat and boots completed the outfit well.

I only realised as I was getting undressed that I’d forgotten my obijime – the perils of wearing a tsuke-obi, I suppose! I think it’s fine in this particular case though, since my kitsuke is so non-conventional to begin with. 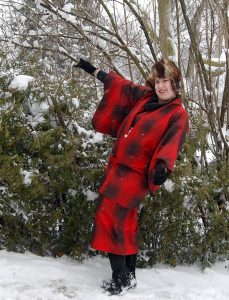 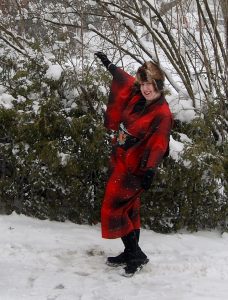 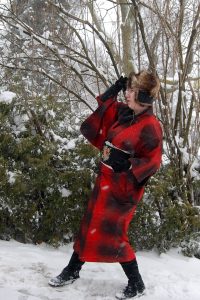 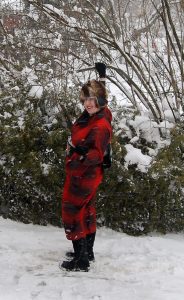 And in case you don’t know where the title and opening bit of this entry come from, I present to you, The Lumberjack Song, from Monty Python:

When I saw this, I knew I needed to have it. It reminds me so much of a stereotypical lumberjack shirt and it called out to my inner Canadian. I’ve already got an outfit in mind for it, including an obi with a maple leaf, a fur hat, and my winter boots. I’ve just got to wait for snow! The fact that it’s incredibly long (167cm) was an extra bonus.

It’s a wonderful thick taffeta silk, much like my other plaid kimono. What I really love about this set though, is that the jacket is a dochugi, not a haori. Dochugi are more casual, and have a substantial decorative cord at the front where they cross over completely, rather than a haori which should hang open, held together with a small set of ties. I’m looking forward to wearing this dochugi with jeans and a black top as well.

As far as I can tell, this set is also brand spanking new. It’s still got the original basting threads and the white lining is completely pristine, and still stiff.