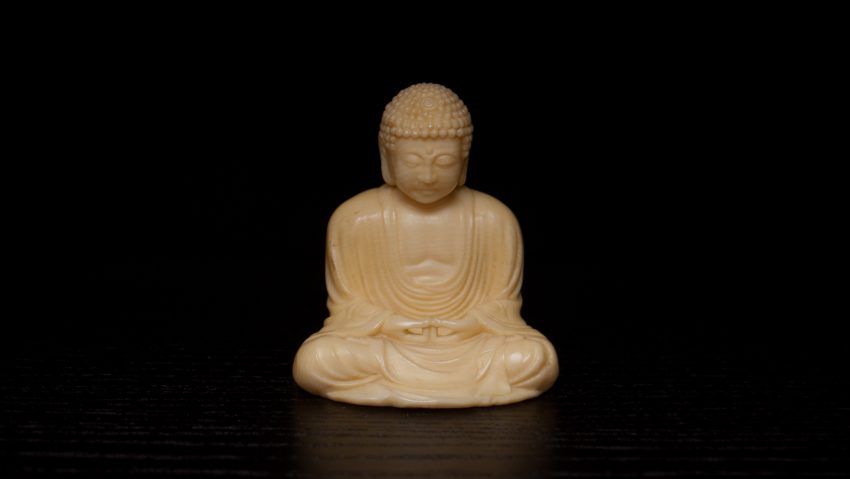 Celebrating the last day of this challenge with a two-for-one. Zen, the Japanese school of Mahayana Buddhism emphasising the value of meditation and intuition, and Zoge, the Japanese word for Ivory.

Rather than dump more info on you, I thought I would just let this statue speak for itself. There’s a grounded beauty in its simplicity I could never hope to explain properly. This ivory Buddha belonged to my grandmother. Both my father and I grew up playing with it. The texture on his head is incredibly soothing, and I have strong tactile memories of running my fingers over it whenever I was allowed to take it off the shelf where it was displayed.

Please note, I absolutely don’t condone the sale, trade, or collection of ivory. This piece is from a time when people had different mentalities and knowledge about this sort of thing. It’s treasured by our family and we appreciate it for what it is, and have no intention of ever letting it go back on the market.

Isn’t it funny how the older I get, the more my tastes gravitate to the bright and youthful? I’m turning 37 tomorrow and somehow I keep finding myself accumulating boldly coloured furisode and things. When I was younger, I was drawn to more shibui styles, and now I guess I’m making up for lost time?

This gorgeous bamboo houmongi is a lovely exception, I think. It’s yet another of my purchases from the kimono bazaar last month and I thought it lent itself quite well to a more elegant coordination that would still allow me to express myself through pattern and colour. The bamboo leaves are in a lovely range of blues, reds, oranges, and purples, which gave me a lot of selection to work with. 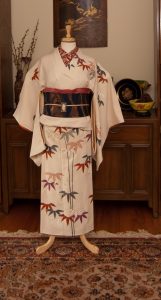 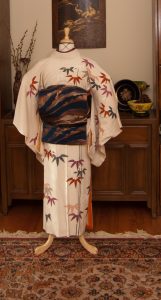 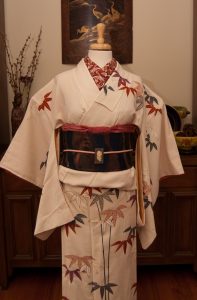 My navy and gold tiger’s eye tsuke-obi is making yet another appearance here. For a silly impulse purchase I made, it’s turning out to be one of my most weirdly versatile and beloved items. It tied in very well with the kimono, and I decided to pull out the warm maroon for the rest of the accessories. The beautiful obidome from Pinto Pony Productions worked well against the ivory backdrop here too, rotated onto its side for a little more drama.

This definitely feels like a more traditional and elegant sort of outfit, appropriate for a woman my age. But it’s not boring or quiet, it’s still got some lovely impact and personality, which is exactly what I was aiming for!

Recently, someone on the Kimono Tsuki facebook page reminded me of my incredible pente lobster obi. I decided it had been far too long since I’d done anything with it, so I went about putting together an outfit in my notes.

I took advantage of today’s holiday to actually get it up on the mannequin. It always makes me happy when the parts of an outfit look as good in person as they did in my head. I knew I wanted to the obi to be the star of the show so I used my ivory iromuji to make sure it really popped. It coordinates well with the shells on the obi and is the most neutral base I’ve got in my collection. From there it was a pretty effortless thing, pulling accessories out in colours that echoed parts of the obi. 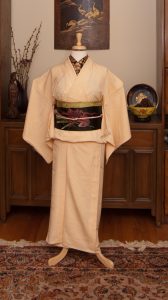 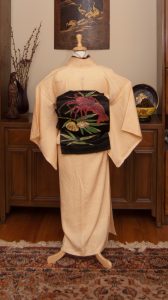 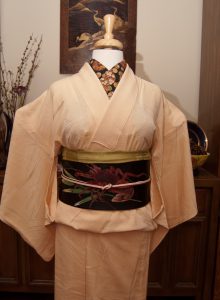 Overall, the end result is a very simple and straightforward outfit, but I think that works really well. The obi is so fun and just quirky enough that balancing it with otherwise very simple pieces feels right. I’ve had fun doing more non-traditional outfits with it before, and it felt good to go in the other direction. In spirit, this outfit actually feels very similar to how I coordinated the stencilled obi I made recently, but I don’t think that’s a bad thing. Iromuji are always a great way to make the obi the star of the show. 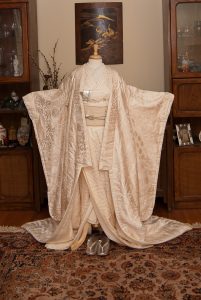 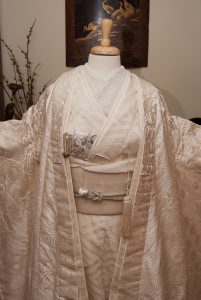 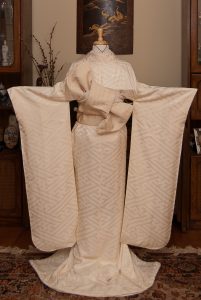 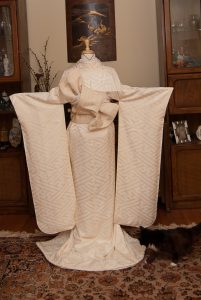