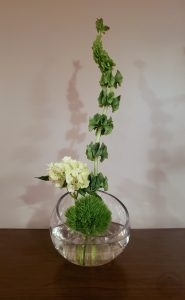 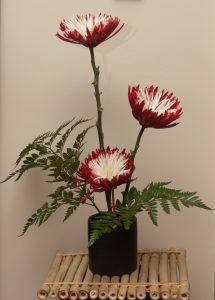 If you’ve been a reader here for a while, you’ve likely seen my efforts to teach myself the basics of ikebana. I do feel like I’ve reached a place where I can’t really grow any more without more focused teaching and direction, but the world isn’t exactly in a state where that’s an option currently. Maybe I’ll look into it once things go back to normal, whenever that might be.

Getting fresh flowers right now isn’t exactly a walk in the park. But my lovely father, who had to leave the house to get food and fill prescriptions, was sweet enough to snag these for me from the flower-seller at the local mall. I love the vibrant contrast in them; they almost feel like an inverted Japanese flag. I went for a straightforward three-height arrangement with only a bit of greenery to anchor it. It may not be anything terribly exciting, but fresh flowers bring me a little brightnessright now, and I 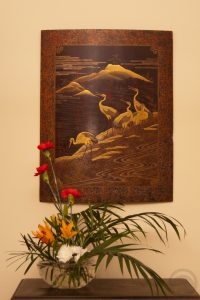 I guess all that complaining about how summer was sticking around actually accomplished something, because it’s wonderfully crisp and cool out now. It seemed like a good time to share this last of the triad I created from that one big bundle of flowers my mum brought home a while back.

The lilies and the greenery forming the horizontal grounding of the arrangement harken back to the end of summer, while the carnations and chrysanthemums scream autumn to me. Unfortunately the piece does end up feeling a little cluttered, in retrospect, and I might have been better off just foregoing the orange lilies entirely. Oh well, you live and you learn, right?

I’d also like to take a moment to thank any regular readers for their patience. My schedule at work and life in general have been a little out of whack for the past few weeks and I’ve found it hard to devote time to blogging. But things are back to normal now, so I should be back to two entries a week or so. 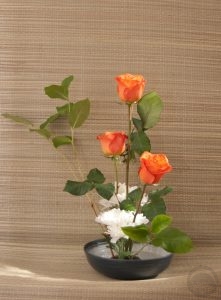 Isn’t it supposed to be autumn this weekend? The trees are still green, the weather is still warm… It definitely feels like a second summer is sneaking back to us. Blegh!

This more traditional-looking sparse arrangement is another one made with the same bundle of flowers as the last one, but it feels quite different I think. The roses make me think of the sweltering heat of mid-summer, but their colour absolutely evokes autumn foliage.

I am definitely ready for it to actually stay cooler and crisper now! Can summer just go away properly, please? 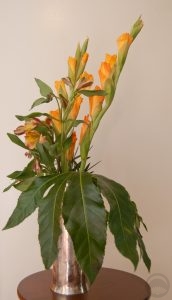 The weather here is finally getting cooler, to the point where I’ve actually felt straight-up chilly the past few nights. It’s wonderful! It’s a sure sign that summer is on the way out.

I don’t like summer but I know lots of people do so I wanted to do something to give my least-favourite season a proper send-off before we say hello to Autumn (the best season). My mother brought home an enormous bouquet of mixed flowers the other day after she was out running errands, and I was able to make three separate compositions with it. This is the first one.

The colours of these bold gladiolas and smaller flowers are the perfect bridge between a mid-summer sunset and warm fall foliage. The whole thing feels almost tropical but still very familiar. The green leaf was actually a fantastic slice of serendipity, and you’ll find out why later this week in an upcoming entry.

I’m not sure how I feel about the overall shape and composition of this one; I’d realised nearly everything I do is the composed, structural moribana style, and wanted to try a more relaxed nageire arrangement but to me it feels less like ikebana and more like a random western-style bouquet to me. I’ll have to keep trying!