I’ve been doing a lot of fancy and non-traditional kitsuke lately, and was itching to get back to kimono basics, if you will. Just an elegant, simple coordination. No fuss, no muss. I also realised I’ve been sticking to more Western colour coordinations, doing things that look “right” in my head and not necessarily keeping kimono colour rules in mind. 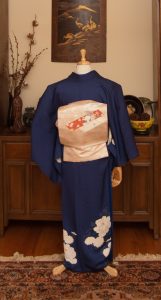 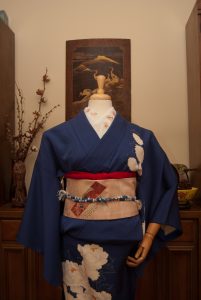 With that at the forefront of my mind, I decided it was high time I coordinate this beautiful pale pink nagoya obi I got earlier this summer. My original instinct was to stick with pastels, but I pushed through and paired it with this rich blue houmongi instead. I love the contrast, and the soft genteel obi pairs so well with the very delicate shading on the botan of the kimono. Red and blue accessories helped pull it all together cohesively.

My next thought for this obi is a black-based kimono. I really love how it pops against darker, richer colours. It’s technically not formal enough for kurotomesode, but because it’s got a metallic pearly-silver sheen to it, I think I can make it work! Maybe I should do that next week. Less folding to do if I use the same obi two outfits in a row 😉 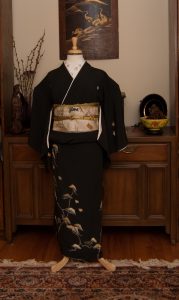 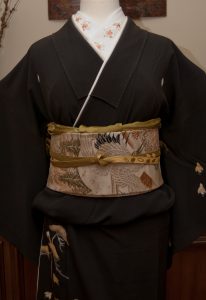 I’ve been trying to focus on saving money, only buying accessories to fill noticeable gaps in my collection and kimono that fit me and are versatile. However, I’d had this peach tsubaki beauty on my eBay watchlist over a month and when I got an alert that it was 30% off I just had to go for it. I’m so glad I did, it’s a really gorgeous, classic piece that I’m very happy to own.

Lately it feels like all I’m doing are themed outfits and challenges, and I was eager to get out of that rut. This kimono seemed like the perfect one to do it with, since it’s got such an elegant and timeless feel to it. I was very excited to do something with it, and the coordination fell into place so smoothly, as if it was meant to be. 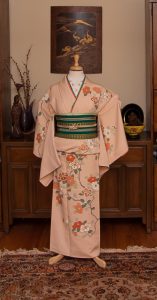 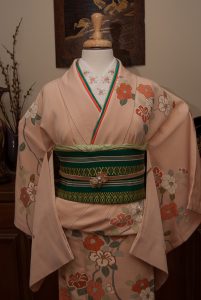 I chose my beloved emerald green hakata obi to coordinate with the foliage on the kimono. It arrived with a vivid peach dateeri already attached but I decided to go all-out and use a green and gold one as well. I love the rich, layered look of multiple collars but very rarely find the opportunity and colour combos to do so. A simple white haneri with peach embroidery helps balance the busy distraction of the multiple layers. The finishing touch was one of the beautiful new brooches I bought to use as obidome. My initial plan was to use the one with the jade green accents, but they got lost against the obi so I went with the pink. It’s not quite the right shade of pink, but it adds a touch of sparkle that I couldn’t resist.

This warm pink beauty made her debut as Aurora‘s outfit in the Disney Princess Kimono Project, but while I was working on that I saw these two pieces together and knew I had to coordinate them at some point. Since winter has finally hit in full force here in Montreal, I was in the mood for something happy and pleasant-feeling, and this seemed like the perfect thing. 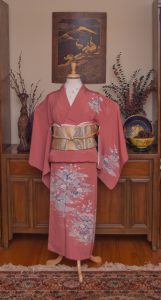 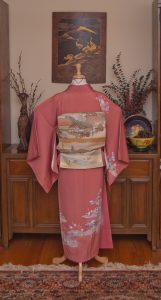 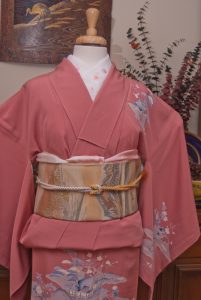 The gold tones of the gorgeous Tokaido obi are offset by small hints of a dusty rose-raspberry colour (visible on the roofs in the back view photo) that is nearly identical to the kimono itself. There are also areas of pale blue on the obi, similar to the details in the kimono motif. Simple pink and metallic accessories pulled everything together; even the leaves on the haneri are gold. This makes for a very classic and cohesive outfit that wouldn’t be out of place at a wedding or formal event. I like how it came together very much and could easily see myself (or nearly anyone, really) wearing it at some point in the future if I could get it to fit properly.

This will probably be the last mannequin coordination for a little while; I’ve got something silly and quite possibly over-ambitious in the works for the next few weeks. There will still be updates and plenty of reasons to visit, but I just wanted to assure you all that this is still the primary focus of my blog, even though it may not look like it as the holidays creep up on us all. There will be outfits to make up for it soon enough.

Snow White – the one who started it all, the OG Disney Princess. She’s kind and sweet and beautiful, and I wanted to make sure I captured all that in an outfit that still felt classic and simple. Her costume is very straightforward, and thankfully that converted quite well to kimono. 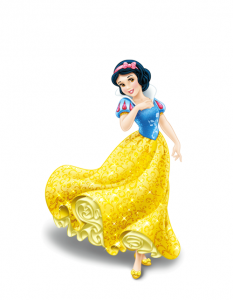 A simple creamy yellow iromuji serves at the base, echoing the skirt of her outfit. The blue obi has birds on it, but it’s in terrible shape and has really awkward pattern placement, so they’re not terribly visible. The outfit felt like it was missing something though, until I remembered the charming red capelet Snow wears for part of the movie. The red haori is a lovely call back to the capelet, and it ties everything together. For accessories, I absolutely needed a poison apple, and tying the bright red obiage into a bow reminded me of her adorable hair bow. The finishing touches were a sweet little bluebird keeping her company and a haori chain with seven sparkling stones on it to represent her the seven dwarves. 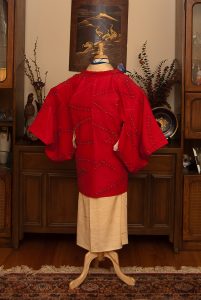 This is probably one of the simplest outfits so far, but I think it pulled together perfectly. It’s sweet and straightforward, much like Snow White herself. And with this, we’re now more than halfway through the project! Only five more to go. I hope you’ll keep coming back to see them. 🙂