Sorry for the lack of updates! Sometime between Christmas and Boxing day I received the heartwarming and thoughtful gift of gastroenteritis. I’m starting to feel better, but still don’t have a lot of energy for kitsuke. Since I’ve acquired a few new ones lately, I thought it would be a good time to discuss tsuke-obi, or pre-tied obi.

There are a few camps when it comes to tsuke-obi. Some people are staunchly against them in any situation, some people have to rely on them because they’re not confident enough yet, and some, like myself, think that well-made ones have their place in any decent kimono wardrobe. They’re a godsend when you’re not feeling well and don’t have the energy to deal with an obi, or if you need to dress a bunch of people in a hurry. They’re useful for fancy furisode musubi that would otherwise require two people to tie. They’re also great for dressing people who don’t have a lot of experience wearing kimono, since they don’t need to be tied as tightly as a “real” obi would be.

Some of them definitely look cheap and are obviously pre-tied. The brightly coloured polyester types with a large butterfly bow that often come with yukata sets are a prime example of these. Except in the direst of situations, I’d never recommend going out and getting one of those, because nothing says “I can’t be bothered!” more than one. Especially if worn with anything dressier than a yukata! However, there are definitely nicer examples. Often times they’re made with solid old obi that have been damaged, or were owned and loved by someone who may have gotten too old to tie her obi efficiently. Some of them are also mass-manufactured, but in a way as to look more like “real” obi. They come in several different musubi, or bows, such as otaiko, niijudaiko, and some larger and more elaborate ones for furisode. Often times, once these are tied on properly and an obiage and obijime added, it’s virtually impossible to tell they are pre-tied. I’ve got a few of them, and two of them are probably some of my favourite obi in my collection.

This is such a stunning piece. I found it on eBay right before the holidays and my folks encouraged me to go ahead and get it and it would be a gift from them. I’m so thrilled. I’ve mentioned my fondness for lobster motif before, and this is not my first lobster obi, but it felt different enough from the one I had that I felt fully justified in buying it.

Pente is an interesting and relatively uncommon technique – it’s a thin layer of paint daubed onto the surface of usually solid black silk. It was popular after WWII when there were a lot of damaged pieces floating about and people generally didn’t have huge budgets for fancy embroidery techniques or high-end dye methods. It was also used to re-work mofuku (funerary wear) into something more useful for everyday, stretching the wardrobe budget further. Unfortunately, due to the nature of most paint, it’s incredibly fragile. It sits on the surface of the garment rather than sinking in, and decades of tugging and pulling on the obi while it’s being tied leaves most vintage pente obi in states of disrepair, paint flaking off or peeling in huge chunks. Because of this I generally avoid anything pente, but because this was a tsuke-obi there was virtually no stress on the paint and it’s in flawless condition.

One of the other interesting and relatively unique things about this particular obi is the way it’s tied. Like most pre-tied obi, it’s in a standard otaiko musubi, but unlike more mass-market ones, it’s tied on a quirky, jaunty angle. This really helps make it look like a “real” obi, and definitely gives it a lot more personality than a perfectly level one.

I make no secret of my ridiculous love affair with all things hakata, but somehow I’d never managed to acquire a standard black and white weave. When I found this one I fully expected it to go for more than I was willing to spend, but I figured I’d throw out a bid and see what happened. Imagine my shock when nobody else bid! This is another variation of an easy obi, it’s not really pre-tied, just separated into a narrow waist bit and a wider bit to tie the actual drum with. It requires a bit more time and effort than a fully tied one, but also allows for more leeway in tying.

This is the first tsuke-obi I purchased, and was really the one that made me a convert. It’s a heavy almost silk blend that almost feels like parchment or canvas. The majority of the vines and leaves are dyed, but the red and silver ones, and a small selection of the navy ones, are embroidered over top, which adds a depth you don’t usually see in mass-market pre-tied obi.

This one is a synthetic, washable faux-tsumugi in a bright fire-engine red. It also has the strangest inflatable obi-makura (obi-pillow) sewn into it. I bought it mainly because of the flocking, which I loved, but it’s become a mainstay for a quick hit of colour. 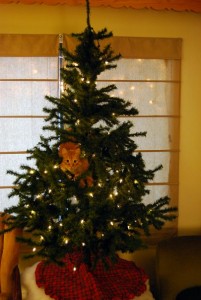 I was a lucky duck and got a wonderful lobster tsuke-obi and some beautiful watercolour prints of traditional Kumadori makeup that I will be sharing soon. I actually have several gorgeous Japanese pieces of artwork I’ve received recently that I’ve been meaning to post – perhaps I’ll do an entry about them now that I finally have a bit of time off.

Did you get any wonderful kimono or related items as gifts this year? If so, what did you get! Please share in the comments 🙂

The holidays are still wreaking havoc on me and my schedule, and I’m slowly going crazy at work, but I saw this commercial and thought it was worth sharing. If you read this blog, odds are you appreciate Japanese culture in general. Even if you are not a beer drinker, it’s still an awesome spot.

With so many selections of teas, sometimes not everyone in the house can agree on what to drink. Unfortunately, most of our teas are loose leaf, which can turn making a single cup into a bit of a hassle. Thankfully, we found an ideal solution!

There is a chain of stores called Le Rouet around the area where I live. They sell kitchen and home decor items, and are invariably always having some sort of sale. A while back I wandered in there and stumbled across these gorgeous little sets of a large mug and single-serving teapot that fits into the top of the mug. We got a couple, but the one I’ve claimed for myself was this beautiful shiny celadon green with ume (plum) blossoms across it.

It’s a good, solid set and I love the way it feels in my hands. The teapot is also excellent for keeping the tea warm – when I’m not drinking, I can put the pot back into the cup and it prevents heat from escaping.

This is the first kimono-related book I ever purchased, way back when. I found it on eBay and thought it would be a worthwhile investment. It’s the book that taught me what items I’d need, and how to tie otaiko musubi. It was probably the best kimono book investment I ever made, despite the fact that it’s only about 4 by 6 inches and 124 pages long. A while back I realized I couldn’t find my copy, so Naomi picked up a copy off Amazon and sent it to me, since the seller wouldn’t ship to the wild norths of Canadia. I’m so glad to have it back!

The book is a wonderful little resource. It’s separated into categories that explain types of kimono, types of obi, different weaving and dyeing methods, and dressing instructions. The information is concise and clear, without being patronizing. The obi-tying instructions are accompanied by great photographs that really help with the whole process.

Overall, the book is really a little gem. If you’re very familiar with kimono it certainly won’t give you any amazing heretofore unseen insights, but it’s a great little book to slip into a pocket or sleeve when you’re traveling or just need a quick reference. If you’re not familiar yet, it’s a wonderful introduction to the basics of kimono.

-People interested in learning the basics of kimono.
-People who want to learn about Japanese textiles and decoration methods.
-People looking for quick references for some simple obi musubi (bows).

-People looking for coordination ideas.
-People looking for in-depth or advanced resource material. This post contains affiliate link(s). If you choose to purchase, I receive a small rebate or commission which goes to the continued maintenance of this site.