Happy Valentine’s Day! Whether you’re celebrating with a partner, family, friends, a beloved pet, or just loving yourself today, I hope you’re having a great day.

I wanted to do yet another obnoxiously girly coordinate and was inspired by my previous Valentine’s Day colour combo but wanted to add a bit more flair. I’d also been itching to do a more kimono-hime style outfit. 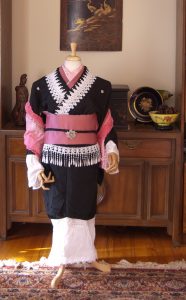 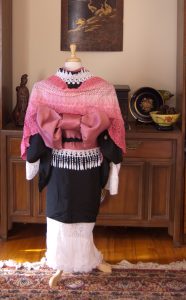 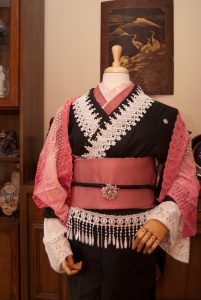 Lately there’s been a lovely trend of slightly exposing juban with really sweet pleated chiffon hems, and while I don’t own one of those (yet), this textured while skirt with lace accents worked a charm. I also used one of the skirt’s tiers to fake extra sleeve layers, and love how they look. Especially now that the mannequin has arms!

I also re-used a lot of the lace I’d initially bought for the Princess Tiana coordination, and I think it pops so well against the black kimono. The pink lace shawl has a very similar texture and ties in to the obi perfectly, as well as echoing the layered pink and white collars I used. A shiny silver and pink brooch used as an obidome completes the look. This outfit is still sweet and romantic, but I think that with the black base it feels a little edgier, and I love that. 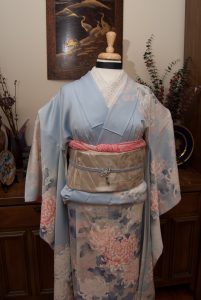 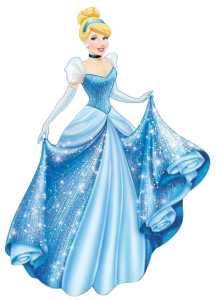 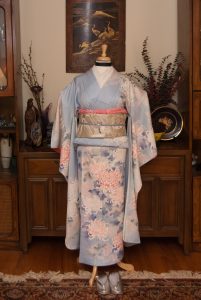 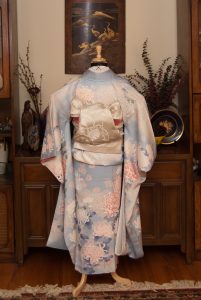 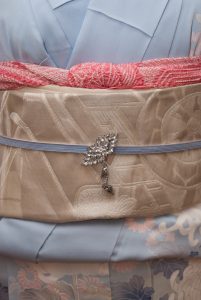 Several weeks ago, the Montreal-based members of the Immortal Geisha forums decided to have a little meetup at the Montreal Museum of Fine Arts. We had a blast and took a ton of photos. I would have posted them sooner, but I was admitted to the Montreal Neurological Institute on fairly short notice for a decompressive craniectomy to attempt to correct my Chiari malformation. It’s only recently that I’ve felt well enough to edit and upload the photos. Hopefully once I am fully recovered I will have a lot more energy, lose a fair bit of retained water-weight, and be much more inclined to wear kimono frequently!

Entirely unintentionally, we ended up dressing in three very different styles. Mischie wore a lovely houmongi and fukuro obi with a coordinating haori in a very elegant traditional style, Ame wore an adorable yukata dressed as kimono, in a sweet modern style, and I (due to a combination of weight-gain and a need to be more comfortable), wore a modern poly kimono hiked up to mini-dress hime style, with leggings underneath. I think we did a fantastic job of showing a variety and diversity of kimono fashion.

I took so many photos, I’ve set up a mini-gallery rather than make this page enormous. 🙂 Feel free to browse!

Right before Christmas, my sweet mother tried to help save my sanity at work by finding scans of a few volumes of Kimono-Hime and sending them to me to read. Clearly, this was a horrible mistake. When I got the adorable lobster tsuke-obi mentioned in the previous entry, I decided I’d do a really non-standard coordination inspired by the Kimono-Hime magazines. I decided to have some fun with layering, and rather than use a juban, I used my yabane komon and arranged it to be visible at the hem and sleeves as well as the collar. I hiked my hems up and used some of my favourite pumps and silver-and-black striped knee socks. While I certainly wouldn’t wear this outfit in any “normal” context, I’m actually really happy with how it came together. It feels more like a dress than kimono, and I sort of love that!

My mom also got me this gorgeous hand-blown glass lobster, and I couldn’t resist posing with it. Of course, Vinnie had to get in on the action too.

I went a little overboard with the photos for this one, and rather than make this too image-heavy, if you want to see the rest please check my Flickr :)i

I was invited to a party on October 30th this year, and I figured it was high time I broke out my Gothic Landscape houmongi. I’d originally wanted to wear it with my crow obi but I still haven’t had the opportunity to repair it. Oops! I figured in the spirit of all things Creepy and Spooky, I’d see about pairing it up with my spider obi instead. I’ve been hesitant about this combo since the kimono and the obi are so close in colour, but my salvation arrived in the mail on the Thursday before the party, in a boxful of shigoki obi. A splash of red was the perfect way to visually separate the two pieces as well as tie in the leaves on the obi. It also helped that one of the shigoki had tassels in the exact same shade as the glorious spiderweb haneri from Naomi.

I decided to further emphasize the spooky theme of the ensemble with accessories – I made myself a cute little hairband with black feathers, a raggedy purple “veil” and a sparkly little spider. I used some of the same tulle from the veil to make a big puffy bow to stick in my obi. Unfortunately, I spent nearly two hours in the car before I was able to get these photos, so my obi musubi has gotten sort of squished and lopsided 🙁

Having fun (after a few drinks) with some of the awesome decorations.

A close up of the amazing spider haneri

I even did my nails to suit the theme. Orange with black spiders and rhinestones! Again, I had fun wit the decorations for this pic

The party was a huge blast. Unfortunately, I had to get out of the kimono around 2 in the morning. I’d been drinking and going to the bathroom was starting to become a challenge! It also started snowing pretty profusely that night and I was worried about ruining my kimono on the way home.