I try not to get too angry or too political on this blog, but there comes a point when keeping quiet is complicit with violence. I’ve devoted half my life to the study and appreciation of Japanese arts, and now more than ever I feel the need to speak up against the wave of racist violence being perpetrated against Asian-Americans of all cultures. While the most recent horrific attacks have been aimed at Korean and Chinese women, the types of people who commit these atrocities typically don’t know or don’t care about the difference.

Those of us who share a passion for one or more aspects of an eastern culture have a duty to help defend the beautiful, diverse people and cultures to whom we owe so much. So what can we do? Stand up. Speak up. Whether you witness something as egregious as a physical assault on an elderly woman, or people in power using racist terms like Kung Flu, or something as “minor” (and I say that sarcastically) as a relative lumping multiple Asian countries into some vague orientalist monoculture, step in and defend the peoples of those cultures you love and respect so much.

Of course, my way of channelling my frustration and anger usually involves the mannequin. I knew the best starting point would be my orizuru (paper crane) obi and haori, as hope for a more understanding and peaceful world. I paired them with this gorgeous Taisho-era bamboo komon, as bamboo is strong and resilient. It feels like an optimistic coordination in a dark time. I know in the grand scheme of things, this is a bit of an empty gesture, but it helps me to cope.

I wish I had a cute or pithy way to end this entry, but I just can’t find it in me today. Thank you for understanding. 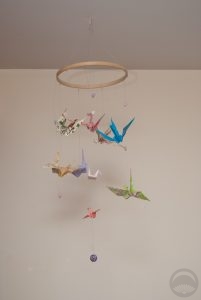 I have mentioned the tradition of Senbazuru, or the act of making one thousand paper cranes to grant a wish before, and mentioned that I had an outfit in mind for that obi, but I was waiting for something. That something was a gigantic box of awesome from my dear darling Naomi and today that box arrived. I am going to be a busy blogger for the next few days, but here’s a little teaser.

One of the things from this box I was most eager for was the black haori with the orizuru (origami cranes) motif. My origami skills are lacklustre, to say the least, but I wanted to put together an outfit as a show of solidarity and hope for Japan. I will be taking better photos of the jacket soon but I was so excited to put the whole outfit together that I decided to do it today. There were a lot of modern dressing aids in the box too, and I thought they would save me a huge amount of time and effort. Boy, was I wrong! I think actually making a thousand paper cranes would have been less stressful and exhausting than the harrowing experience that was getting dressed today. In the end I broke down and did everything the old-fashioned way, and it worked out eventually. It may have been a hassle but I really like the way it turned out.