You guys! It’s done! While part of me is excited to work on other things, I admit that I’ve had so much fun doing these that I am a little bit sad to see it end. I’m thinking of occasionally doing one-off other Disney ladies now and then (Alice, Kida, Esmeralda, Megara, etc). If you would like to see those, please let me know!

This has been a really interesting project for me, working with different styles and trying to make sure the spirit of each Princess comes through without being overly “costumey”. I think I’ve succeed quite well in the end. Seeing them all together like this is very satisfying! It’s also pretty neat to me to see how different the living room looks in different weather/lighting/etc. 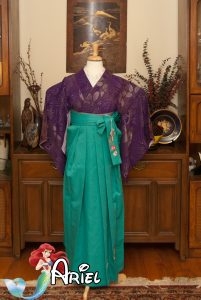 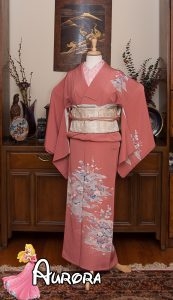 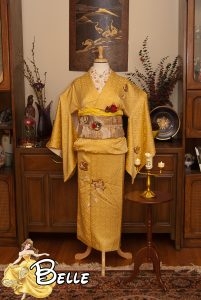 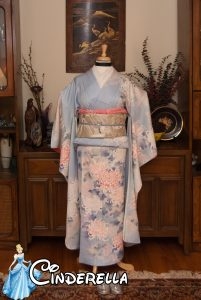 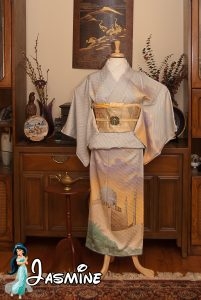 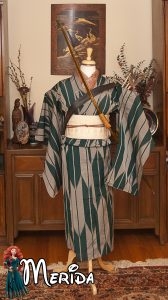 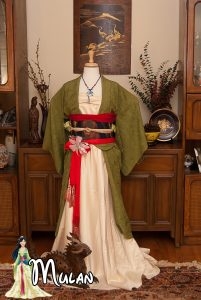 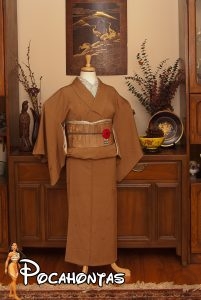 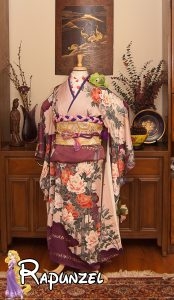 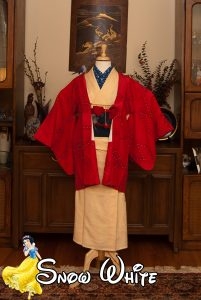 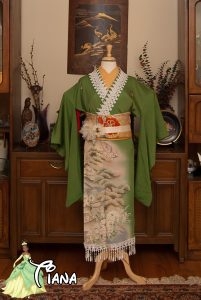 For full details of each outfit, as well as my thought processes and any meaning in the textiles or designs, please check out the individual post for each princess.

If you’re looking for beautiful, classy Disney jewellery to accent your own Princess (or Villain!) kitsuke, Diamond Treats has a fabulous collection that would be the perfect finishing touch for any of these outfits. Read about how they brought it to life here!

This has been an amazingly fun project. It encouraged me to think out of the box while still technically adhering to the rules in most cases. It’s been a blast, but I am also happy to be finished. I’ve got a few simpler things in the works – something fun for Halloween and a little surprise for my Facebook followers. However my work schedule is about to get hellish. Not only are the holidays closer than they seem, by the first week of October I will be the only employee in the store, which means I’ll have to be in there all day every day six days a week. I will do my best to keep a semi-regular content schedule, but things will be sparse for a bit. Thanks in advance for understanding! 💖

If you’ve enjoyed this project and would like to see more things like this in the future, or would just like to encourage me in general, please consider dropping a few dollars in my PayPal account or support me on Patreon.

Everyone, please say hello to the newest contributor to this blog. Her name is Tsukiko, she has no head, and she will be modelling outfits and coords that are either too small or too fragile for me to wear myself. As you probably know, my health is still not fantastic, and dressing myself simply for photoshoots is tiring and not ideal. Hopefully having Tsukiko around will encourage me to post more frequently! I am aiming to do one coordination a week, but we’ll see how long that lasts 😉 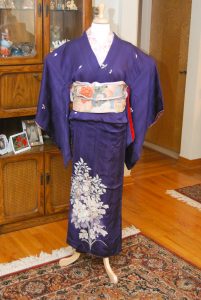 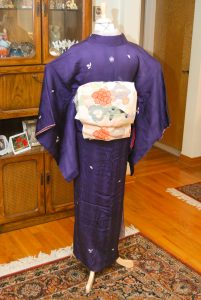 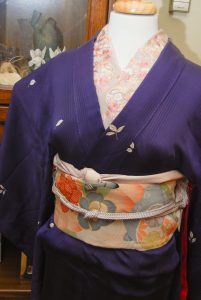 Today’s coordination was mostly an excuse to use this gorgeous antique irotomesode/komon hybrid. I have been in love with this thing since I received it, but it’s incredibly delicate and fragile silk and it’s very tiny. Realistically, even if I lost a hundred pounds, it still would not fit me. I paired it with a vintage remake obi I love to bits that’s also awkwardly small, and I love how soft and dusty they feel together. The obiage, obijime, and haneri are all modern, but they have a similarly desaturated pastel feel and I think they look perfect with the kimono. Please click on the images to see larger versions.

I was already in my early twenties when I started collecting kimono, and in my mid-twenties when I became serious about it. I’d always told myself I would never buy a furisode, particularly an expensive one, because I was already borderline too old for them, and I don’t go to dressy enough events to justify one. It’s funny how things change.

I’ve already mentioned Vintage Kimono in Boulder in another entry, but that was actually not my first trip there. I go to Boulder with some frequency, as my best friend lives there. The first time I went, I insisted he take me to “this place that sells kimono”, and he was kind enough to come with me.

I’d promised myself I was not going to go overboard, and asked him to help me with some restraint. I tried on a few things, put them back, found a haori I’d decided I was going to get, and thought I was done. And then I saw this:

Until this point I hadn’t even found a furisode that interested me – most of them were too gaudy, too youthful, or too colourful. This one drew me in from the moment I saw it. The muted, dusty colours, the relatively (by furisode standards) subdued layout, the gorgeous ruffly peonies. I figured I’d just throw it over my shoulders and imagine myself in it, and be done with it.

So I carefully took it off the rack, and draped it over my shoulders. I looked at my friend. At this point I should probably explain that while he is my best friend and confidant, I am also very much in love with him. I know it’s entirely possible for a man and a woman to be just friends but unfortunately I was not that lucky, and this is where being a girl sucks sometimes. When I posed for him while wearing it, he made this goofy half-smile and said “It looks nice on you” and my heart just melted into a pile of hormonal goo. I knew it was coming home with me, no matter that I had no place to wear it, and could barely afford it. To this day, it’s still one of my favourite pieces, both for its appearance, and because of the memories I have of purchasing it. I’ve only tried it on a few times, since dressing myself in furisode is more complicated and convoluted than it’s worth, but I vow that I will wear it out to an event or party at least once before I turn thirty. I will also wear it better than I did here – these photos were taken before I started properly binding my bust, and I know I folded the hem way too short.

No bad puns today, nothing remotely good was coming to mind. You can thank me later. 😉

I bought this one on a whim. The listing showed a few serious stains, but they’re all on the inside panel and are hidden when it’s worn. Also, because of the stains, I got it for a steal. It’s a little small on me (story of my life), but it’s so detailed and beautiful that I don’t mind.

It’s got a gorgeous temple and mountain design, with water around the hem, and flowers, glorious flowers! Every time I look, I find something new and interesting. So far I’ve found multitudinous grasses, plum, chrysanthemum, iris, pines, peonies, bamboo, pawlonia, maple.. well, you get the point! 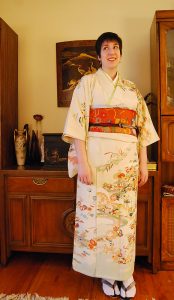 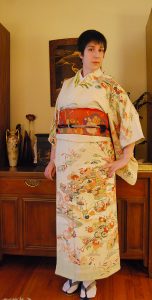 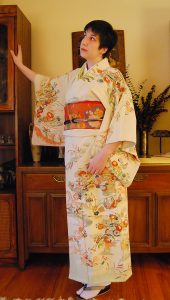 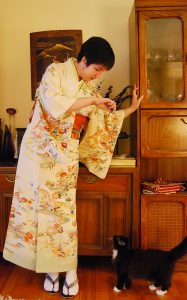 I paired it up with an equally festive and floral orange nagoya obi, and blue and green accessories to bring out the water around the hem. Also, say hi to my kitty, Tribble. She also wears white tabi!

Since I no longer own this kimono, there is no catalogue photo of it, unfortunately. 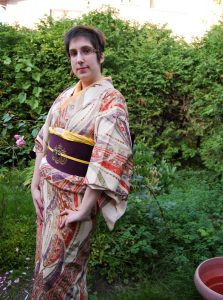 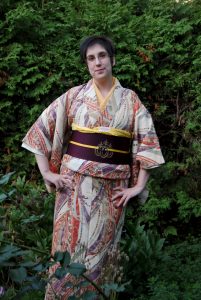 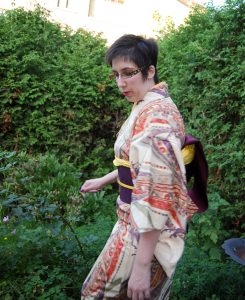 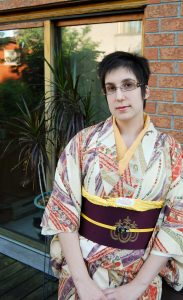 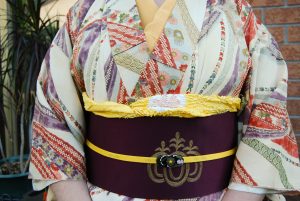 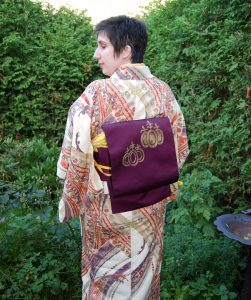