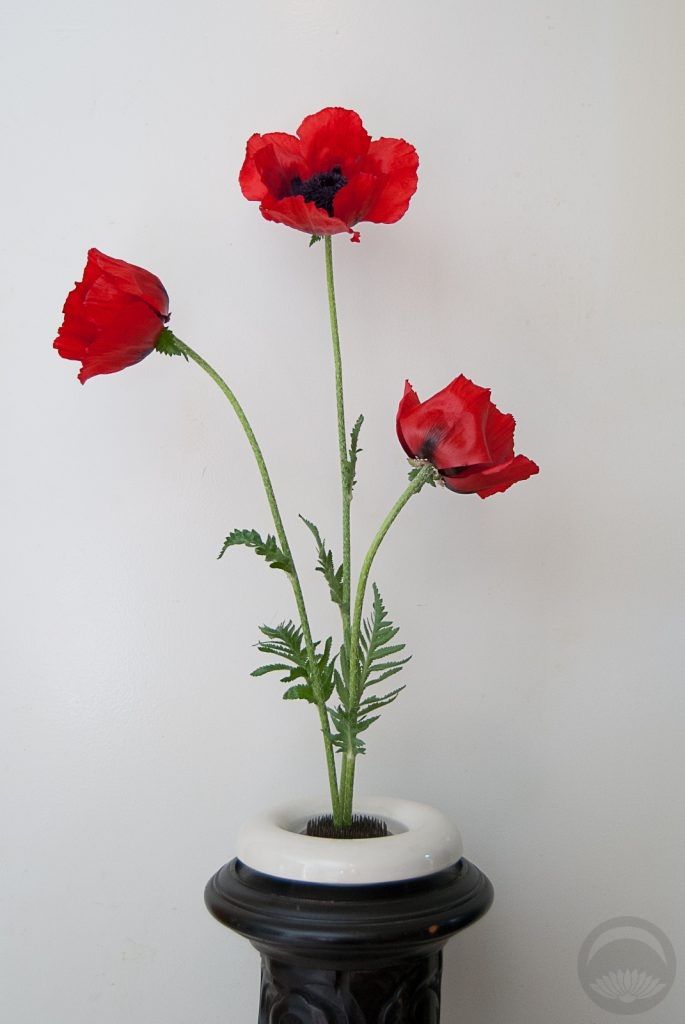 More beauties from our garden – this time it’s these stunning, vibrant poppy blossoms! Poppies hold a special place in this household, for multiple reasons. My mother’s name is Poppy, and my parents met in the Canadian Armed Forces, so the poppy also represents remembrance. There are poppy-themed items all over our house, I have poppies incorporated into one of my tattoos, and of course my mother planted some in our front garden.

I really wanted this piece to be a very simple and clean arrangement with no clutter. I went for a traditional format inspired by what I learned of the Sogetsu school style at the workshop I attended a few months back. A plain white vessel and black pedestal serve to anchor the whole thing while ensuring that all the focus remains on the blossoms themselves. And look, no screen today! Don’t worry though, it’ll definitely be back soon. 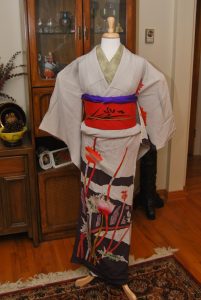 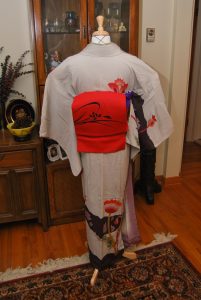 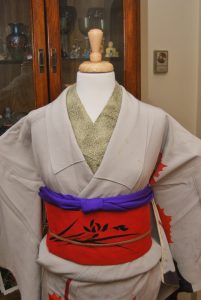 Yesterday was quite an exciting mail day! On top of the obi I posted about, I received a couple of books I’d been waiting for and this beauty. The obi yesterday was so special and so heartwarming that I wanted to make sure it had its own entry, so here’s the other item I received!

Since I started collecting kimono, one of the things on my life’s want list has been a kimono with poppies on it. They’re not a particularly common motif, so it’s been a long and arduous hunt. I wanted poppies for several reasons. Firstly, my mother’s name is Poppy (okay, it’s technically Καλλιόπη but she goes by Poppy now for obvious reasons). Secondly, as a Canadian with family members who have served in the military for generations, the significance of the poppy as a symbol of remembrance is very important to me.

When I finally found this particular piece, I decided I would fight for it. Thankfully, due to a few hidden spots and a seller who a few people are having problems with lately, it didn’t go for as much as I was anticipating, which was nice. It’s a gorgeous dove-grey chirimen with really unique, vaguely psychedelic poppies. There’s also some strange batik/bokashi hybrid designs on the background, I’ve never seen anything like them. At first it looked like dirt and stains, but on closer inspection they’re definitely intentional.

The flowers themselves have a very unique and sort of funky style, but are definitely and absolutely poppies – the seed pods and leaves are a dead giveaway.

Another awsome thing about this kimono is that it’s signed. There’s a signature on the inside okumi panel that would be hidden when worn, but it makes it a little more special to me.

There will be kitsuke photos of this particular piece soon, but I won’t be wearing it 😉