If I’m being completely honest, when I embarked on the #monokimono challenge I had no real plans to do a brown coordination. Brown felt so blah and boring to me. And then I ended up with this stunning warm brown Taisho-era houmongi and all that changed. I’ve coordinated it three or four times already this year and here I am, doing it again. It’s just so pretty and soft. 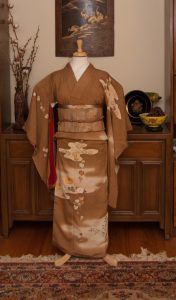 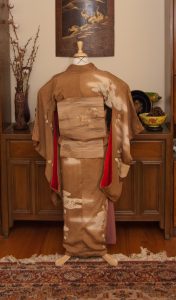 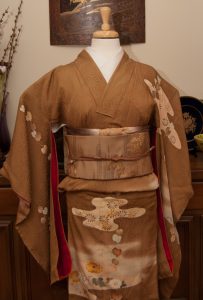 My plan was intially to use my brown iromuji as a sort of dounuki, an extra inner layer. But the colours are so identical it didn’t really add anything visually, and the sleeves are so much shorter that it looked odd, so I just scrapped that plan. I’d never used this particular obi before and thought it would be a good time to feature it, since it’s got the same subdued, dusty feeling as the kimono and the brown tones are an excellent match. What I didn’t realise, however, is that it’s a hikinuki obi. Hikinuki obi are meant to be tied in a different way and the pattern on the drum is upside-down. Normally they’re much bolder designs, since they’re often used for quick changes by stage performers. This is by far the most “boring” hikinuki I’ve ever seen. I did manage to get it tied with the design the right way up though! It just took a little more fussing than I’m used to. A few more brown accessories finished things off. I only have one brown-based haneri and it’s much more modern and bold in feeling and looked out of place, so I went with basic white.

Only one month of monochrome kimono to go, and a much bolder outfit inn the works for December.

Bamboo for resilience, Paper cranes for hope
Z is for Zen, Zoge
The one that started it all...
Back in black, birthday-style.
Showa Fabulous Christmas in July