Rinzu is like jacquard, a beautiful tone-on-tone pattern achieved by weaving techniques only. No dye, no paint, just right off the loom with a rich, beautiful depth.

I have lots of pieces in my collection that have a rinzu base, but none of them show off and exemplify them quite as gorgeously as this vintage purple iromuji given to me by a friend. I decided to do an entire outfit (or as much as possible) using only solid pieces with bold rinzu fabric. 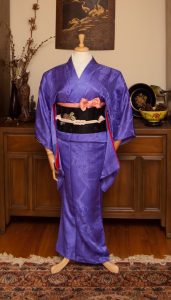 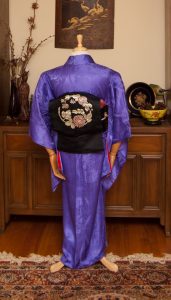 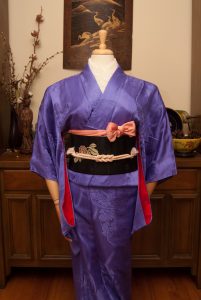 Aside from the utterly lush purple kimono, I used the mofuku obi I painted a while back, since you can still see the lovely water pattern in the black fabric. The obiage is a soft pink that ties in well with the obi, with a rinzu design of sakura and geometric lines. I tied it in a little bow for more sweetness and softness. I’m honestly not sure if the haneri counts as rinzu, the weave is much more textured and raised than anything else I own. But the design is woven, not painted or embroidered, so I ran with it. As for the obijime, the only rinzu one I own is an all-black mofuku piece, which felt too heavy against the black obi so I just went with a soft pink round braid.

The outfit is quite simple, but I think it does a fantastic job of showing off all the gorgeous woven design and texture that is rinzu silk!

When I saw the listing for this item, I fell hard and fast in love. The late Meiji/Early Taisho style designs around the hem looked so soft and gorgeous, the varied-width stripe rinzu silk was awesome, and I found the small scattered pattern combined with the hem design really unique. I was expecting people to fight for it, but somehow it slipped under the radar and I got it for a great price.

It’s quite small, but I expected that. I will be able to wear it for photos but I don’t think I’ll be comfortable wearing it out of the house, sadly. However, as a conversation piece it’s pretty priceless. Nowadays kimono fall staunchly into very specific categories ranging from informal komon with all-over patterns to very formal tomesode with designs only below the knees, usually with a crest. This one somehow manages to be both. Before World War II, kimono were worn much more frequently and it was more common to see ones that blurred or outright crossed these formality lines, but I’d never seen one that was a combination of such blatantly different designs.

Another interesting aspect of it is that the motifs (peony, narcissus, and nandina) are very Spring season-specific. It’s a formal crested kimono, generally these tend to have more celebratory or all-season motifs, to prevent the need from owning too many. Anyone who could afford to have a formal, crested kimono that could only be worn for a month (possibly two) out of the year clearly had an appreciation for the finer things in life, and the finances to back that up.

The auction listing showed this as a standard indigo blue, so I was more than a little confused when I opened the package and a purple kimono fell out. I saw the rinzu stripes and the little leaves and knew it was the right item, but it’s a completely different colour. I don’t mind at all though – I’ve wanted a dark purple kimono for a very long time but they usually go for much higher prices. The yuzen work on the hem is also even more soft and delicate than the auction pictures had led me to believe. It’s a gorgeous piece, and my only complaint is that I like it even more than I thought I would so I am sad that it doesn’t fit me very well.