There’s two things “wrong” with this outfit, but when has that ever stopped me? I had another outfit planned for this week’s coordination but when this kiku furisode arrived I knew I had to pair it up with my purple kiku obi. Normally you wouldn’t match the motif of the kimono to the obi, especially not identically stylised ones like this, but the colours and the round mums were just too perfect to pass up. I also tied the obi in niijudaiko, which isn’t a musubi you’d typically pair with furisode, but I thought it added an interesting, more mature feeling to the outfit. 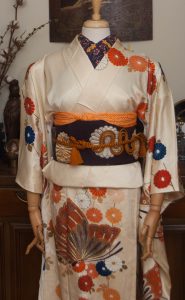 Since I was on such a matchy kick, I ran with accessories that were also perfect matches to some of the colours in the kimono. This outfit definitely feels very autumnal, which also happens to be my favourite season, so of course I love the end result!

What do you think? Do you like to understand the rules but deviate from them now and again, or do you prefer to stick to what works? I think both have merit; so long as you can explain why you chose to break a rule and aren’t doing it in a formal situation or stealing the focus from someone else, sometimes it can work out really well!

Palate Cleanser
Ashes to Ashes
It's Beginning to Look a Lot Like... Something
Book Review - Kimono Now
Lobster Bisque