I’ve done some wa-lolita coordinations before, to varying levels of success, but somehow it wasn’t until I got a solid black mofuku kimono that it occurred to me to do something using this skirt! I found this incredible Alexander Henry Midnight Pastoral skeleton toile fabric a few years back, and Naomi was kind enough to make it into a skirt for me. 💖 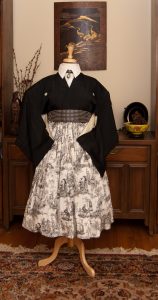 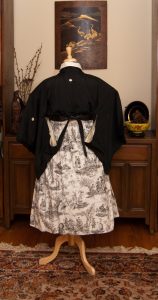 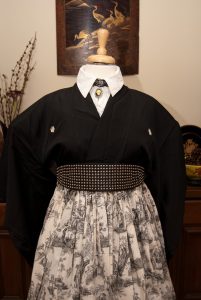 I decided to stick to the sort of gothic/Victorian vibe the fabric brought in and paired the solid black kimono with a high-collared white blouse and a black lace choker with a skull cameo on it. In lieu of an obi, I used a wide studded leather belt which worked alright out but I think next time I’d prefer something with a little more volume in the back. As it is, the front of this outfit has much more interest, and feels a little unbalanced because of it.

This didn’t start out as a memorial outfit, but as I was working on it I realised I had Rick Genest/Zombie Boy on my mind. He was certainly not as much of a household name as David Bowie or Anthony Bourdain, but he was a true original and a Montreal native, as well as being an artistic muse to so many misfits and creatives. The repeated skeleton motifs in this particular outfit, as well as the use of the mofuku kimono, seem like a fitting tribute for yet another flame snuffed out too soon.