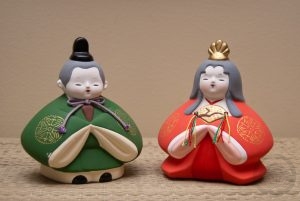 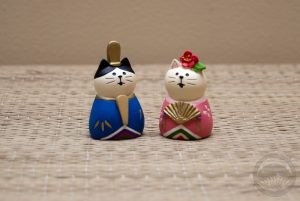 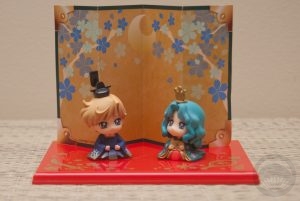 Just a quick post today, to wish you all a happy Hinamatsuri! One day I hope to own a full, proper set of hina dolls but until I have the space and the budget for it, I’ve started a little bit of a personal tradition. Last year I made an origami set and while I still love them I wanted to do something a little more complex for this year. When my friend Amanda posted her Perler bead hina doll set on Facebook, I knew I’d found my project. They were very fun and relaxing to make. I’d forgotten how fun Perler bead crafts are, and I’m happy to have been reminded. I can’t wait to make more stuff 🙂 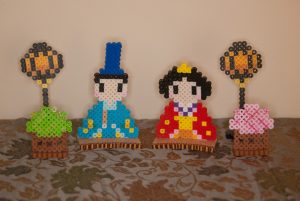 If you’d like to try making a set of your own, here is the pattern for the Obina (男雛, Emperor) and here is the Mebina (女雛, Empress). I didn’t have the exact colours needed so I took a bit of creative liberty but I think they look absolutely adorable!

Today is 雛祭り or Hina-matsuri! Literally translated as doll festival, it’s also referred to as Dolls Day or Girls Day. Dolls representing the Emperor and Empress (and, should you have the space and budget, also members of the court) are set out on a display and people pray for the happiness and health of any girls in the household.

Originally, I had planned to do a coordination on Tsukiko, something girly and pastel and princessy, but that idea got a bit derailed today. I might give it a shot tomorrow.

Instead, I remembered I had a new kimono doll post in the works, and figured what better day to finish it up and post it than today? These kimono dolls posts continue to be some of the most popular features on this blog if my back-end statistics are to be believed. I’m glad people enjoy them as much as I do. Especially with my health issues, and living in a country where it can go from -40 to +40 in the span of a few months, these dolls give me a way to enjoy coordinating and experimenting with kimono in a way nothing else can. Kimono and wafuku continue to grow in popularity and their presence is becoming more and more mainstream, which means lots of fun new dolls to play with! Here are a few recent ones I’ve found and particularly enjoyed.

I also made my own origami Obina (emperor) and Mebina (empress) origami dolls. You may have seen them already if you follow me on Instagram, but here is a better photo. 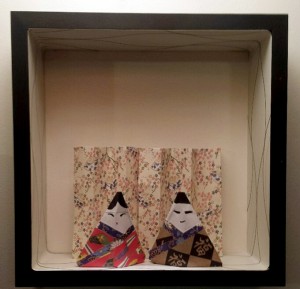