I found this kimono on eBay a few weeks back and fell in loved with it. Last thing I need is another tiny kurotomesode, but it was too beautiful to let it escape and my folks said it could be my birthday present from them, so I took the plunge. It arrived yesterday and it was more gorgeous in person than I could have imagined, the auction photos did it no justice. So I knew right away that I was going to do something with it today, on my day off. My initial plan was to do a fairly straightforward traditional kitsuke, with a formal obi with lots of metallic, white accessories, something clean and simple.

All that went out the window this morning, when I woke up to the news that Gord Downie had passed away. He was the frontman for a group that nearly all Canadians are familiar with, the Tragically Hip. He was diagnosed with glioblastoma just over a year ago, and rather than withdraw from the public eye, he fought back with everything he could. The band went on one last tour, big and loud and loving. He continued to work tirelessly for justice and equality, speaking loudly for Canadians whose voices had been silenced over the years. Everyone knew he didn’t have long for the world, but he filled that time with so much love and passion and brightness that it still hurts enormously. All day I’ve seen people whose jobs require them to be professional and detached (news anchors, radio announcers, even our Prime Minister) lose their composure and break down while talking about Gord. 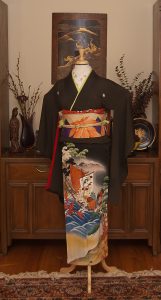 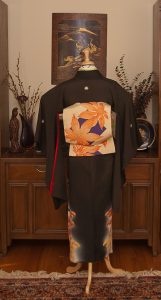 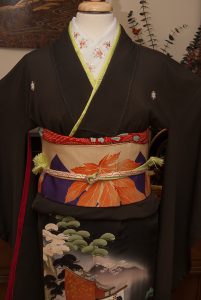 What does all this have to do with my kimono? Well, as you may have noticed I have a strange coping mechanism of coordinating outfits to deal with grief. Maybe it’s not the healthiest thing, but it works for me. So to deal with this, I decided to throw caution and tradition to the wind and coordinate it in a bright and bold way that makes me happy. I’d like to think that someone who wore brightly coloured holographic suits and fantastic hats during his farewell tour would appreciate that. A vintage chuuya obi with maple leaves felt appropriate for someone who took so much pride in his Canadian heritage, and the accessories brought a vibrant punch to the outfit.

I’ll leave you with some of the lyrics from Courage (for Hugh MacLennan), one of my favourite songs of theirs.

So there’s no simple explanation
For anything important any of us do
And yeah the human tragedy
Consists in the necessity
Of living with the consequences
Under pressure, under pressure.
Courage, my word, it didn’t come, it doesn’t matter,
Courage, it couldn’t come at a worse time.