If you’re anything of a regular reader, you’ll know of my fondness for items with the 53 Stations of the Tokaido motif. I also love the colour red. So when I saw this online, I clearly had to go for it!

I like it because it’s simple and vibrant, and also has two stations I did not have yet on obi. I had Nihonbashi on a fan, but I like having them on wearable pieces better. I also find it interesting that the other station, Kanagawa, is from Aritaya, one of the “other” editions of the prints (the standard one used for this sort of thing being the Hoeido edition). 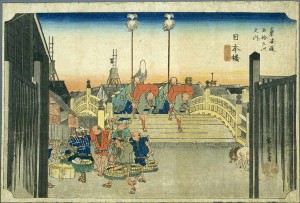 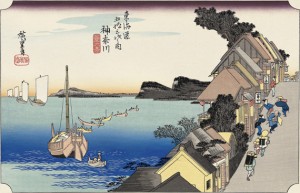 I was so smitten with the kimono that arrived yesterday that I decided to put it on today, despite not having anywhere to go. Sometimes it’s nice to wear kimono just for the sake of wearing kimono – especially delicate vintage pieces.

There’s still a bit of ambiguity about what this piece actually is, but the general consensus on the Immortal Geisha forums is that it’s likely a vintage hikizuri. Because of that, I decided to go with a geisha-inspired outfit. Not a full on costume, but proper kimono with a bit of “flair”, if you will. I paired the kimono up with a red juban, a black and white hakata obi, and used a red shigoki obi in lieu of a momi (the red cloth geisha wear wrapped around their torso under the obi). I am really pleased with how this pulled together, and took far more photos than I usually do. Sorry about that!

Because of the formality, the styling choices, and the age of the kimono, this is not an outfit I’d feel particularly comfortable wearing out of the house, but I think it turned out well and I felt very pretty in it.

Why yes, that was indeed a reference to Inception as today’s subject line. Not only is it one of my favourite movies of the year (and possibly of all time), it is entirely relevant to the kimono I received this morning. If you’re familiar with Inception, the concept of a “dream within a dream” will be very familiar to you. So imagine someone like me, who dreams of kimono regularly, finding “kimono within kimono.”

When I first saw it on eBay I was completely smitten. It is a kurotomesode (short sleeved, five-crested black formal kimono), which is definitely something I don’t need more of. However, rather than the relatively typical celebratory designs of cranes, flowers, carts, fans, etc, the pattern on this kimono is… kimono! All around the inside and outside hem of this kimono are wooden racks with kimono out to dry, as well as bowls and tools for washing. I’ve never seen anything like it, and I knew I had to have it. It ended up going for a bit more than I’d hoped to spend, but was still well worth the investment.

Both the age and the usage of this kimono are a bit of a mystery. The design is very avante-garde and non-standard for a normal woman, and the hem is slightly padded, which weigh in the favour of it being a hikizuri of some sort. The length of the kimono is also longer than average for its apparent age, but not quite long enough to be proper hikizuri. It may have been made for a particularly short geisha, or possibly just a very stylish woman. It’s hard to say. The sleeves are lined in red, which is a typical element of Taisho and early Showa era kimono, but they are slightly shorter than average for that era. The body is also lined in white, not red, but that may have been replaced at some point during its lifespan.

Update, April 22, 2012 – Naomi recently discovered the existence of a motif known as tagasode, or “whose sleeves?”

Literally, “whose sleeves?.” Painting theme depicting beautiful kimono 着物 draped across a wooden rack, ikou 依桁. The subject was usually painted on folding screens *byoubu 屏風 and became popular in the late Momoyama and early Edo periods (16c and early 17c). Although the subject is highly decorative, the word tagasode has deep literary connotations and probably originated from a line in KOKIN WAKASHUU 古今和歌集 (905): “Iro yorimo/ka koso aware to /omohoyure/tagasode fureshi/yado no ume zomo 色よりも/香こそあはれと/おもほゆれ/誰が袖ふれし/宿の梅ぞも”. Tagasode often implies a beautiful woman whose absence is missed, since beautiful sleeves are thought to evoke the image of an elegant woman and the fragrance arising from her kimono.
In early examples, typical objects belonging to a room in the pleasure quarters or even a beautiful woman herself were depicted; a screen in the Burke Collection, New York (early 17c), includes a musical instrument, koto 琴, while two young women are painted on early 17c screens in the Nezu 根津 Museum, Tokyo. Variations on the tagasode theme became more removed from literary associations, and finally the kimono and stand remains as the only motifs depicted against gold foil background. There are many examples from the Edo period, often by unknown genre artists.

It’s absolutely beautiful up close – everything is covered in tiny and delicate patterns, from the kimono to the racks holding them up. The kimono are all outlined in gold couching thread which is in impeccable condition, no drooping or detached threads anywhere that I can find.

I seem to have a knack for finding kimono that are technically kurotomesode but have characteristics that may throw them off. My chidori and matsu hybrid kimono is another prime example. As for this piece, it may be an oddity, and I may not know who wore it or when, but I love it nonetheless.

I realized recently that I had no hanhaba obi that were not hakata weave. I told myself I should probably remedy that and then promptly got distracted by bigger and shinier things. Such is life. Thankfully, I stumbled across the listing for this little beauty on eBay with less than a few hours to go, tossed out a bid, and won it for a song. The pictures portrayed it as sort of a flat purple with yellow which seemed cute but not particularly exceptional. Imagine my pleased surprise when I opened the mail to discover a rich, shimmering aubergine with bronze accents and a bronzey-gold back side. I am not sure what I’m going to wear it with yet, but it’s beautiful, multi-seasonal, and dressy enough to wear with more slightly formal kimono. I’m so pleased!

My birthday is on this coming Tuesday, but I hate having long, relaxing dinners (especially ones with alcohol involved) during the work-week, so I invited a few friends and my folks to come dinner at a restaurant I’d been wanting to try, Sakura on de la Montagne. I read that the waitresses and staff wore kimono, so I figured I would not stand out too much if I wore one too. What I was not anticipating is that the entire restaurant staff would be Japanese and dressed in simple komon and relatively informal obi. Enter one gigantic white person in a rather dressy kimono and even dressier obi, and hilarity ensues.

I chose to wear an outfit comprised of nothing but gifts, and I still cannot believe how perfectly everything worked out. I paired the pink Takara houmongi from Arian with the Stations of the Tokaido obi from Suara, and finished it off with a beautiful haneri from Naomi and obiage and obijime from my dear friend Jeff. Even the shawl was a gift – my grandmother crocheted it.

The restaurant was absolutely lovely. The decor was decidedly Japanese and we sat in a tatami room, but it was subtle and tasteful – not a cheesy theme restaurant, which unfortunately are the norm around here. The owner, Ishii Noriko-san, was incredibly kind and fussed over my outfit repeatedly. She’s offered to contact a Japanese tutor for me, and insisted I come back again in kimono. The food was delicious and the wait staff were all very kind. They allowed me to order off the “other” menu – the one intended for the Japanese clientele, and I had unadon. They also found out the dinner was for my birthday, and brought the table some delicious green tea ice cream (mine had a sparkler in it!) as well as a special box of yokan for me. I was incredibly touched.

My mother took a photo of Noriko-san and I. Doesn’t she look stylish? I loved her obi so much! This photo also does a great job of illustrating why clothing made for the average Japanese woman is so difficult for me to wear. Uchikake in the front receiving room Delicious unadon. This wasn’t on the regular menu, I had to special-order it from the “Japanese people” menu XD. I love me some grilled eel. Next time though, I think I will try the katsudon! I was incredibly surprised and touched when Noriko-san came in with my special birthday yokan. I also received some incredibly sweet gifts, Andy got me a DVD of a spy series I know he is very fond of, The Sandbaggers, and Leslie gave me two beautiful antique woodblock prints by Kunisada that she purchased in Japan quite a while ago. I was so touched. The whole evening was wonderful.