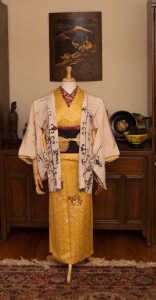 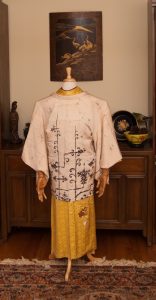 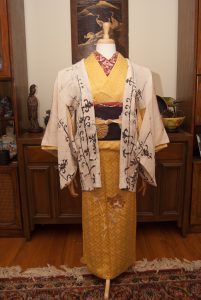 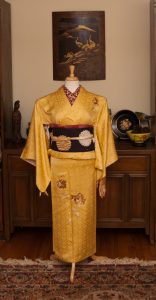 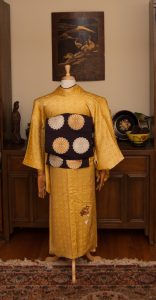 I have always tried to keep this blog apolitical. It’s a hobby, a place of beauty fun and a bit of a distraction from the “real” world. However, it’s becoming increasingly obvious that in the modern political climate, remaining detached is essentially an impossibility. This is not to say that I’m suddenly going to change the focus of things here, but I am having a harder and harder time keeping my mouth shut about the state of things. Syria, Brexit, Trump… we are living in a world that is increasingly on the defensive; cold and closed and unwelcoming.

So with that in mind, I needed a subtle reminder that there is always hope in the world, always a chance for rebirth and renewal. I bought this obi along with the hawk obi from my last coordination, and had intended to pair it with my leaf-green iromuji from the get-go. The obidome and obijime were bought at the same time, and seem like the perfect little complement. I’ve always had a soft spot for pearls, and they draw the eye to the silvery buds on the obi that otherwise blend in and nearly disappear. This felt like the perfect time to tie everything together. 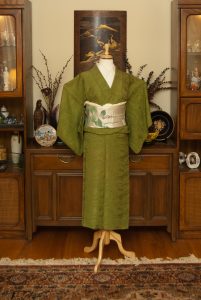 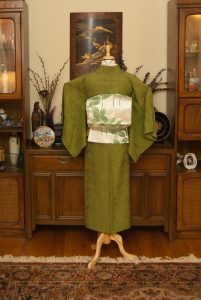 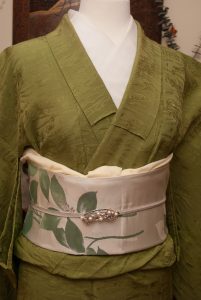 The outfit feels as though it’s looking forward to Spring, but also looking forward in general. In a time when everything seems uncertain, at least we know the leaves and grass and first buds of the flowers will be back soon enough. It may not be much, but at least every time I see it I will be reminded that after every hideous, frozen, deathly winter there will inevitably come a spring when everything is reborn.