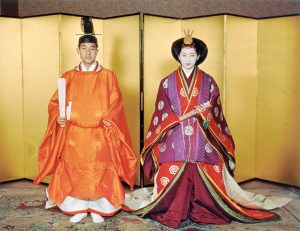 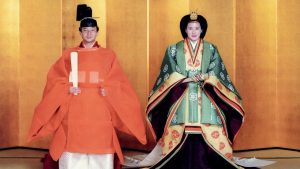 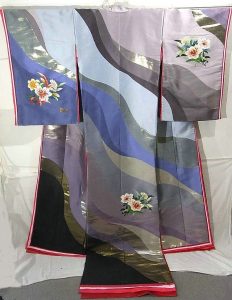 I found this book while browsing the “ending soon” section on eBay. I’d never heard of it before, and wasn’t sure if it would be worth the $25 it was being sold for, so I looked it up quickly on Amazon. There was a glowing review by KimonoMomo, whose opinion I greatly respect when it comes to Japanese textiles, and the least expensive used copy available was priced at roughly $65. Based on those factors, I figured it would definitely be worth the investment. Unfortunately, I did not think to ask the seller – shopenjapan – about shipping costs from LA to Montreal, and had a bit of a case of sticker-shock when they sent me the invoice. They did everything in their power to get me the lowest price, were very patient while I tried to find an alternate shipping solution, and when the final shipping to me cost less than anticipated they refunded me the difference. In the end it was still less expensive than buying a used copy on Amazon, and the service was great. I’ll definitely buy from them again if they list similar books!

So, was it worth it? Absolutely! It is actually an illustrated museum catalogue for an exhibit of the same name, much like Kazari: Decoration and Display in Japan 15th-19th Centuries, which I reviewed earlier. It is divided into essays about many topics, from the evolution of the kosode to calligraphy as a motif to the cultural and social impact and relevance of red “beni” dye. Each essay is complemented by many lush full colour photographs and multiple page spreads, as well as smaller inserted black and white and detail shots. When I first got it, I spent several nights simply ogling the photos.

The essays themselves are written in a fairly dry academic style, but they are not difficult to read or alienating to people unfamiliar with the terminology. Any Japanese terms are italicized and explained in clear plain English the first time they make an appearance. There is a very useful glossary of terms in the background that is a huge asset to anyone interested in kimono either as wearable clothing or as historical costume, as well as many fascinating and well-organized charts and graphs documenting the flow of Japanese historical eras, common kosode pattern layouts, and garment dimensions. It is not something I’d suggest for light bedtime reading, but it makes an excellent addition to any kimono-specific or Japanese cultural reference library. Several of the kimono in the book are also in the Kyoto Shoin, Yuzen edition book, but I found this to be a good thing – it was very interesting to see that some of these garments are so historically famous and relevant that they appear in multiple texts.

The layout of the book is also very lovely, the text is clear and the images are crisp and beautiful, with vivid colours and plenty of detail shots. Captions are always large enough to be legible but small enough not to be obtrusive. There are also some very charming touches, such as the text on the first page of each section being in the shape of a kimono. This may not seem like such a big thing, but it really adds to the cohesive feel of the whole book, and as someone who studied document layout in college it really tickled me.

-People looking for how-to-wear guides.
-People looking for coordination ideas. This post contains affiliate link(s). If you choose to purchase, I receive a small rebate or commission which goes to the continued maintenance of this site.