Well, it’s been a hot minute since I’ve done an outfit on the mannequin, hasn’t it? Between events, injuries, heat waves… it just got sort of pushed to the wayside. But I was determined to keep going with the monoKimono challenge this weekend!

A dear friend sent me this kimono a few weeks back, and since it’s a beautiful solid colour I knew it would be great for a monochrome outfit. Problem is, it’s that very difficult shade of royal purple that kimono fans all know intimately; it’s hard to coordinate, it’s hard to photograph. Even the catalogue photo of it looks a bit off, since I had to process it to make the kimono colour accurate. 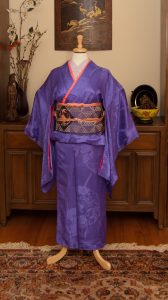 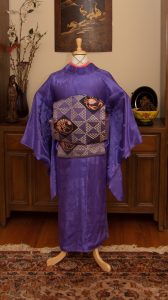 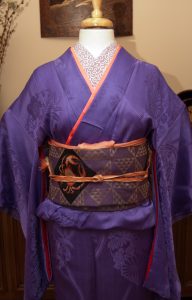 The only obi I had that was in the same cool-toned range was my beloved crustacean chuuya obi, so that was a done deal. Rather than try to hide the orange accents in the obi, I figured I’d use them as a pop of contrast and emphasize it with the accessories. The outfit still feels primarily monochrome, but the brighter salmon tones help break it up and keep it visually interesting. The haneri is a lighter shade of purple, but I think it still works well and echoes the white in the obi. Overall, the outfit is even more successful than I thought it would be, which pleases me immensely.