My aunt and I have a particular bond in my family. First, I should mention that my mother and my aunt are identical twins, so growing up my relationship with my aunt (and conversely, my cousins’ relationship with my mother) may have been somewhat different from a normal aunt-niece dynamic. I honestly have no way of knowing for certain since I have no other point of comparison, but sometimes it felt more like having two mothers and several sisters.

We also seem to share certain things that nobody else in the family does to such an extent – my aunt is a civil engineer and interior designer, and while I am certainly nowhere near as capable or qualified, I’ve always loved decorating, the artistic aspects of interior design, and had I had more of a brain for math I probably would have tried to be an architect. We’re also both more prone to health problems than most of the other people in the family, who mostly seem to be fit as the proverbial horses.

I guess what I am trying to say is even though I don’t see her as often as I did when I was little, we connect on some level, and she always seems to have a knack for finding things I would appreciate. When I was younger she often gave me art supplies to try to encourage my artistic side (which I shamefully admit I have been horrible and neglected since then). For Christmas this year I asked for a very strange and specific camera lens adapter and it was decided it would be better if I went to buy it myself, so I could make sure I was getting the right model. My aunt, however, was not comfortable with the idea of me having nothing to open, so she gave me this gorgeous set of four prints of Kumadori, or Kabuki stage makeup. They are absolutely stunning. Naomi has brought to my attention that they seem to be inspired by the tradition of oshiguma:

There is a delightful custom associated with the use of kumadori, that of oshiguma. The actor takes a silk cloth to make a “print” of the make-up on his face with after the play has concluded. This is considered a souvenir of the very essence of the performance and is highly prized as a collector’s item.
source

After the “yay opening presents!” hubbub subsided, I managed to catch my aunt aside and ask where on Earth she’d gotten them, because I’ve never seen anything like them. She looked at me sheepishly and confessed that a friend of hers had received them as a thank-you gift while contracting with a Japanese company, had passed them on to her, and she in turn had passed them on to me. I was so touched. Now some of you may think ill of re-gifting, but to me this wasn’t so much a re-gift as the passing forward of a really beautiful treasure, ensuring they finally found a home with someone who would appreciate them. The previous owners were simply fostering them until they found their forever home! 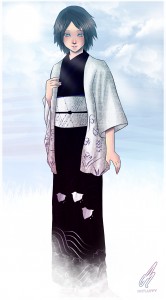 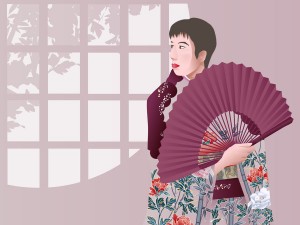 This piece was actually done for a contest on Gaia, and it was definitely one of the most amazing entries I received. As you may know, this particular furisode is incredibly special to me so of course I’m going to be biased when it comes to artwork of it. But look at the sheer amount of detail in this piece. The artist, Elsa Lee, put in a painstaking amount of work to faithfully reproduce the pattern on the kimono. What’s more, can you believe she did it with a mouse?! My hand hurts just thinking about it.

If you want to see the incredibly high-resolution version of this (and believe me, you do!), you can check it out on Elsa’s DeviantArt account

I often mention my love for the series of prints known as the 53 Stations of the Tokaido, and my passion for collecting kimono items with the stations as a motif. When I saw this adorable box of the Hoeido edition of prints come up for auction, I couldn’t pass up the opportunity to buy them. They’re a lovely portable size, just about the size of playing cards, and not only are they very well-printed and well-presented, they make a wonderful quick reference for my collection. The full set is there, all 53 Stations as well as the start and end points. Unfortunately, due to the way they are printed, the scans end up slightly pointillized. In person, however, they are absolutely beautiful. The box is also very charming.

Feel free to click on the thumbnails to view individual pieces or open one and use the arrow keys to navigate through the gallery.

I spend a lot of time on an internet community called Gaia Online, and I’ve met many incredibly talented artists there. I mostly collect artwork of my little avatar on the site, but every so often I find an artist whose style and skill urge me to ask them to do something a little more exciting, and I commission them to draw me in kimono. I thought it might be fun to share some of them.

Today’s is an incredibly cute and fun watercolour by Abbakus. I think her art style worked really well with the graphic vintage feel of the outfit that I wore to ToyCon October 2010! She was a total sweetheart to work with, very careful to work with me to make sure all the details were accurate. It’s making me want to wear this ensemble again soon. XD

To see a larger version, you can click the image or click the link to view her DeviantArt gallery.