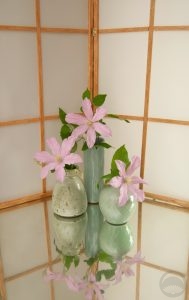 Today’s arrangement is a very simple, clean, and summery trio of clematis in serene celadon vases. The vases are all different shapes, but the colours are very close and I think that really helps the whole thing stay balanced. It doesn’t just look like I grabbed three random containers; it feels thoughtful and intentional. I love the repeated triangular shapes formed by the flowers and vases so much I chose to display it on a mirror, to echo that repetition even further. It also adds a watery feel that encourages the cool fresh summer vibe I was hoping to achieve. Overall, I’m very pleased with this one.

That wasn’t initially the case though! Just as a reminder that sometimes, things don’t work out and your best course of action is to come back later. Here was the original arrangement and photo I took yesterday, where the flowers were too crowded by foliage and you couldn’t even see the tall vase. I debated about posting it as-is, but I was unhappy with it and I’m glad I tried again. Also, if you’re like me and you’ve got trypophobia just be warned that photo has a particularly pock-marked side of the really earthy vase exposed. That might be part of why it displeased me so much!