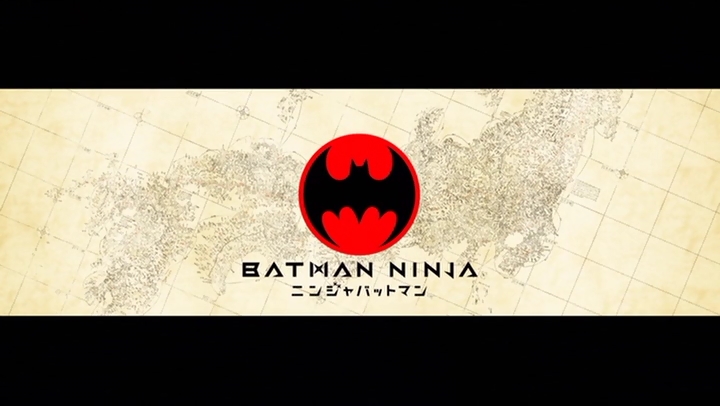 First off, let me say, this movie is a trip and a half. That’s not necessarily a bad thing, just be prepared for ninety minutes of utter ridiculousness. The animation studio are the same folks who put out some of JoJo’s Bizarre Adventure and all of Pop Team Epic, so if you’re familiar with either of those shows you’ll have an idea of the flamboyant craziness to expect. If that intrigues you, click through to read on!

The plot is a fairly straightforward isekai story. It starts out in modern day Gotham, with the Joker triggering a time-travel device that Gorilla Grodd has built in Arkham Asylum. This manages to plunge a bunch of familiar faces from Gotham, both good and evil, into feudal Japan. This is is definitely where one of the strongest aspects – the art direction and character design – shine through.

This actually leads me to one of the most frustrating and disappointing things about Batman Ninja; these incredibly cool character designs are utterly wasted. Bane shows up very briefly, in the absolutely perfect guise of a Sumo wrestler, but the scene lasts for less than a minute and we never see him again! Even the rest of the rogues only show up as very brief background support. It feels like they came up with epic designs and then felt the need to shoe-horn in every single one. I would have much preferred focusing on maybe one or two and them getting a little more screen-time. Clearly Grodd and the Joker are the primary antagonists here, but there’s just so much wasted potential with the rest of them that never gets expanded upon.

Without spoiling too much, I’d like to discuss the story itself. The movie is padded out with some fairly common anime tropes – the villains each have their own palace that transforms into a giant robot, and at one point all those giant robots combine to make an even larger robot. There’s the initial “defeat” of the hero, a training montage, and the final battle where good ultimately triumphs. The format does give them animation team some great room to show off, with the training montage done in a completely different style that evokes traditional sumi-e paintings.

Unfortunately, this interlude also brings me to another big negative in my eyes. We meet an original character, Eian, who is the leader of a clan of ninja who honour bats and await a foreign hero in a bat mask to lead them. While I realise that this is a Batman movie, and people are watching it for Batman, this smacks of the White Saviour trope. Eian is a very cool-looking character and could have been developed so much further. I know I’m starting to sound like a broken record here, but if there are two concepts to take home from Batman Ninja, they’re “awesome character design” and “wasted potential”.

This isn’t to say the movie is disappointing or not enjoyable. It’s absolutely ridiculous and a lot of fun. It’s definitely not “necessary” watching, but I can say with relative certainty that you’ve never seen a giant combiner-style mecha composed of multiple imperial palaces and piloted by the Joker get swarmed by monkeys in yoroi and giant agglomerations of bats. If you’re looking for a visually distinctive and over-the-top way to spend an hour and a half, it’s worth a watch, but I’m certainly not going to say you have to drop everything and watch it right now. And yet, it’s still a better Batman adaptation than Batman V. Superman.

In short, if you’re looking for unique animation, Batman, lots of monkeys, fantastic character design, and general insanity by all means, give Batman Ninja a watch. If you’re expecting deep, emotional storytelling or historical accuracy maybe give it a pass.

Batman Ninja is currently available on Blu-Ray, DVD, or streaming on Amazon Prime.

Everyone cheer, Melons are here!
All I want for Christmas is my two front teeth geta
Something old, Something new...
Fun with kimono dolls!
Art Gallery - Steven Universe Wafuku